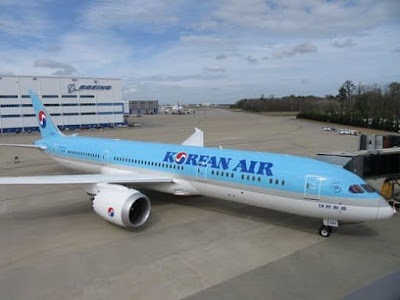 The aircraft, the first of 10 787-9s that Korean has on order, will seat 269 passengers in a three-class configuration.

Korean Air will debut the 787 this spring on domestic flights between Seoul and Jeju, a short high-frequency route that will allow the carrier’s crews to familiarize themselves with the new aircraft type. The airline will shift its 787s this summer to the high-profile international routes that the widebody is designed to fly.

Toronto will be the first of Korean’s international destinations to get the 787 in June.

Korean Air president Walter Cho said Los Angeles, Seattle and Barcelona will be among the airline’s next destinations to get service on the jet, though he said it was too early to offer a precise timetable.

Korean Air’s 787s will feature first, business and economy cabins. However, in a move that’s generated buzz on some aviation sites, Korean Air will use the same seats for its first and business class cabins.

Cho said the difference between the first- and business-class cabins will come from a higher, “very exclusive” level of service in the first-class cabin.

“Our customers know our service in first class is very special,” Cho added to reporters Wednesday.

When asked by Today in the Sky if Korean Air might add new routes to the United States in 2017 or 2018, Cho indicated that was unlikely.

“We’re not pursuing new routes, but we’ll expand frequencies to Seattle and Los Angeles,” he said.

He also said the airline’s Las Vegas service could be another of its existing U.S. routes to get a bump in capacity.

“It may not happen this year, but soon,” he said about plans to bulk up those routes.