In A Time Of Rising Nationalism, Boeing Becomes The Model Of What An American Company Should Be 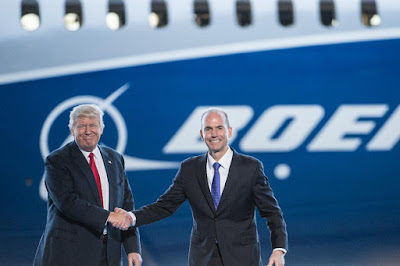 In the months since Donald Trump was elected president, no corporate executive has interacted with him more than Boeing Chairman & CEO Dennis Muilenburg. The two men clearly like each other. However, Muilenburg's access to the president isn't the result of personal chemistry. America's biggest exporter is a model for what Trump would like other U.S. manufacturers to be -- a technology leader that continuously innovates and adapts to stay ahead of its state-subsidized foreign competitors.

Last year the company delivered 748 jetliners, making it the global leader in its industry for a fifth consecutive year. Meanwhile, its defense unit delivered an additional 178 military aircraft to domestic and foreign customers, continued producing the highest-capacity communications satellites in the world, and moved forward with building a space launch system that one day will carry U.S. astronauts to Mars.

What President Trump sees is that America's future as an economic and military superpower is inextricably linked to the fortunes of the Boeing Company. If Boeing (a contributor to my think tank) falters in its race to stay ahead of European rival Airbus, America will be out of the large-aircraft business -- one of the few types of technology exports where the U.S. still has a robustly positive trade balance. And if Boeing can't sustain its longstanding role as a leading producer of tactical aircraft, then there will be only one fighter house left in America.

Trump alluded to these challenges in his remarks last week at the company's South Carolina aircraft plant, where it is building the latest version of its 787 Dreamliner commercial transport. The Dreamliner is emblematic of Boeing's long history as an innovator, which began with development of the first modern airliner in the 1930s. It subsequently developed the world's first successful jetliner (the 707), the first wide-body jetliner (the 747), and the first commercial transport designed entirely on computers (the 777).

Today its single-aisle 737 is the most widely used jetliner in the world. Over 13,000 have been ordered, and on average one takes off every five seconds around the clock. But sustaining such franchises requires great discipline, in part because unlike Airbus, Boeing receives no handouts from its home government. The World Trade Organization ruled in 2010 that every jetliner Airbus has developed was illegally subsidized by European governments -- which helps explain why Boeing is the last surviving U.S. builder of commercial transports.

Without the kind of protection that Airbus enjoys, Boeing is periodically required to take big risks in defense of its business. For example, its 747 jumbo jet wasn't just the biggest transport ever built, it required the largest enclosed space ever constructed to be assembled. The factory was so big it had its own micro-climate, complete with trace precipitation. Unfortunately, Boeing made its 747 gamble as the national economy was softening, and as a result employment at its commercial airplane unit plummeted from 83,700 in 1968 to 20,750 in 1971.

Donald Trump probably understands better than any other president in modern times why companies have to take big risks to stay on top. He himself skirted bankruptcy to emerge as one of the best-known entrepreneurs in the world. But because he has been there, he can appreciate the pressure from shareholders, stakeholders, customers and regulators that CEO Muilenburg must deal with every day. He knows the world's biggest aerospace company won't survive its second century without smart leadership and a supportive business environment.

That's why Trump changed his position on the Export-Import Bank, the federal agency that helps customers and suppliers of companies like Boeing to sell their goods abroad. Trump had expressed some doubts about Ex-Im on the campaign trail, but when Muilenburg explained that all of his overseas rivals have access to export credit agencies, that any loans have to be paid back with interest, and that there is no cost to taxpayers, the president listened. That's why it matters to have an entrepreneur rather than an academic in the White House.

Some reporters think it is ironic that Trump journeyed to the South Carolina plant for the rollout of a plane with extensive foreign content. What got lost in their stories was that over 80% of Boeing's commercial airplane suppliers are based in the U.S., and yet the vast majority of its planes are sold overseas. When the company sources production inputs in places like Italy and Japan, it is usually with an eye to securing strategic markets for its products. In other words, selectively sourcing abroad is one reason Boeing is able to sustain over 120,000 jobs in America.

And that's just the tip of the iceberg -- if you include all the jobs at suppliers, and the economic activity that is indirectly generated, the number of U.S. workers who depend on Boeing is some multiple of that amount. Trump understands better than most people that 95% of global consumers live outside the U.S., so Boeing can't stay on top unless it competes effectively offshore. If that means sourcing some items to other nations, it's a price that must be paid to keep Americans working.

But how many American manufacturers besides Boeing have managed to dominate global markets while still performing the vast majority of their design, engineering, production and support within U.S. borders? Not many. So Boeing is Donald Trump's idea of what an American company should be. When the WTO finally completes its review of the illegal trade subsidies Airbus continues to rely on in competing with Boeing, it's a safe bet America's biggest exporter will find a champion for robust penalties in our 45th president.


(Loren Thompson - Forbes)
Posted by Michael Carter at 9:03 AM