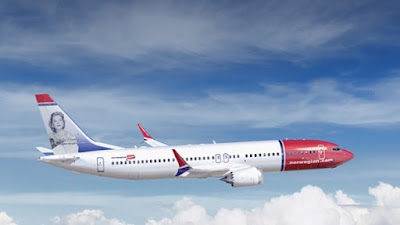 
Low-cost carrier (LCC) Norwegian has unveiled new routes from five cities in the UK and Ireland to US destinations, starting in June, as it continues its rapid expansion.

Norwegian, which will operate Boeing 737 MAX aircraft configured with single-class economy cabins on the routes, said it was launching 10 new routes with 38 weekly transatlantic flights, and that prices would start at €69 ($73) one way.

Norwegian’s Irish subsidiary, Norwegian Air International, won its long-awaited and controversial approval for a foreign air carrier permit from the US Department of Transportation in December—a move that was unpopular with domestic US airlines.

Norwegian, whose capacity in ASKs is expected to grow 30%, and which plans to take delivery of 32 new aircraft this year, said it would serve three US east coast destinations using smaller airports that offer good access to New York, Boston and other parts of New England, but which have significantly lower landing charges. The carrier said it would pass the savings on to its passengers.

The first ever transatlantic flights from Cork, Ireland, to Green Airport, and new routes from Dublin and Shannon, Ireland, to Stewart International and Green airports will also begin July 1, the LCC said. It already operates low-cost flights to eight US cities from London Gatwick Airport.

“Norwegian’s latest transatlantic offering is not only great news for the traveling public, but also for the local US, Irish and UK economies, as we will bring more tourists that will increase spending, supporting thousands of local jobs,” Norwegian CEO Bjorn Kjos said.