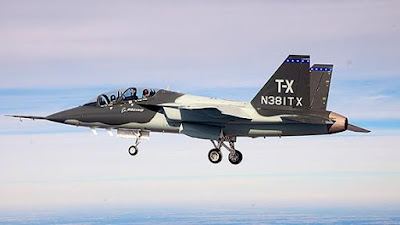 And as foes fall, the aircraft manufacturer's chances of winning a $50 billion contract rise.

Late last year, I made the bold (and perhaps foolishly so) prediction that Boeing had the advantage in bidding to win a $50 billion Pentagon contract to build the U.S. Air Force a new trainer jet.

This was despite the fact that:

Lockheed Martin -- i.e., not Boeing -- builds the only fifth-generation fighters in the U.S. Air Force today.

In all likelihood, the U.S. Air Force will never buy another manned fighter jet from anyone other than Lockheed Martin (i.e., still not Boeing). Lockheed Martin is itself offering a variant of its very popular T-50 workhorse to compete for the very same trainer jet contract that Boeing wants to win.

Whoa, Nelly! So did I ever go out on a limb there, predicting that Boeing, and not Lockheed, would win the Air Force's T-X trainer contract.

And yet, that outcome is getting more and more likely with each passing week.

When we looked at this competition two months ago, there were at least five, and possibly six, aerospace teams competing for T-X. Boeing and Lockheed, of course, but also a coalition between Raytheon, Canada's CAE, and Italy's Leonardo; another, featuring Northrop Grumman (allied with BAE Systems and L-3 Communications; a strange-bedfellows combination between America's Sierra Nevada Corporation and Turkish Aerospace Industries; and -- maybe -- an independent entry from Textron with its internally developed Scorpion jet.

But already, the field is thinning. Late last month, we learned that Raytheon has withdrawn its bid from the competition, and taken CAE, which had hoped to handle the on-ground training and simulations side of the contract, with it. Then, earlier this month, Northrop Grumman revealed that it is also dropping out, leaving its simulation expert, L-3 Communications, similarly in the lurch.

(For the record, CAE says it would "welcome" a chance to help out whoever ultimately does win T-X with its simulation needs. One imagines that L-3 would be just as eager to share in the eventual $50 billion award.)

So where does this leave us? Teal Group aerospace expert Richard Aboulafia thinks that at this point, Boeing and Lockheed Martin are the only serious contenders still bidding on T-X.

Now, Textron and Sierra Nevada would probably take issue with that assertion. Regardless, Aboulafia gives Lockheed Martin the advantage in this contest, telling Investor's Business Daily that because Lockheed is bidding a T-50A trainer that it has already developed, Lockheed has "absolutely no upfront costs to speak of" to inflate the costs of its bid, giving it a cost advantage over Boeing.

As for me, I'm sticking with Boeing. Its "Boeing T-X" offering features both a single engine (like the F-35) and dual vertical stabilizers (also like the F-35). To my mind, this simply seems better suited to train pilots to fly the F-35 than does Lockheed's single-engine, single-vertical-stabilizer design. Additionally, given that Boeing has lost the F-35 contract to Lockheed, and the B-21 bomber contract to Northrop, I have a strong hunch the Pentagon will decide it's now Boeing's turn to win a contract.

Unless Boeing bids unreasonably high, it's my favorite to win the T-X trainer dogfight -- and breathe new life into Boeing's defense business.

(Rich Smith - The Motley Fool)
Posted by Michael Carter at 9:53 AM