Shares of Southwest Airlines LUV have declined 20.2% so far this year, underperforming the industry’s decrease of 12.5%. 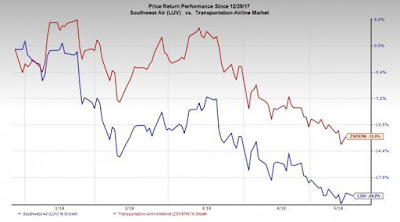 The back-to-back in-flight glitches put Southwest Airlines (LUV) in a tight spot. Further adding to its woes are the rising fuel costs.

Reasons Behind the Plunge

Southwest Airlines has been grappling with numerous challenges right from the onset of 2018. It all started with the winter storm Grayson in January, causing multiple flight cancellations and hurting the company’s top line. The destruction continued unabated with successive nor’easters striking in March, further dampening the situation.

The storms resulted in huge revenue loss for the company.The adverse effects were partly witnessed in first-quarter results wherein the low-cost carrier reported lower-than-expected revenues. Also, passenger revenue per available seat mile (PRASM: a key measure of unit revenues) slid in the period. Also, a tragic incident of April resulted in large-scale dissatisfaction among the customers as the carrier made an emergency landing at the Philadelphia International Airport due to an engine failure. Consequently, one of the passengers died while seven others were injured.

Southwest Airlines has been struggling with low bookings ever since this fatal incident. In fact, the carrier provided a bearish view on unit revenues for the second quarter due to the same reason. It expects revenue per available seat mile (RASM: a key measure of unit revenue) to decline between 1% and 3%. Also, last month’s traffic results were affected by the incident. Traffic slipped 0.3% while capacity expanded 1.5%. As traffic contracted and capacity increased, load factor deteriorated 150 basis points. What's worse is that the impact from the incident is likely to linger for quite some time and recovery of the lost revenues might be a slow process.

Similar incidents have happened this May too. Earlier in the month, the carrier made an abrupt landing when one of its window panes broke. Adding to its woes, another Southwest Airlines flight had to make an emergency landing a few days ago due to pressurization issue, causing massive panic among its passengers. The successive flight horrors will possibly add to the airline’s already low demand, thereby denting profitability and revenues.

Another issue having engulfed the entire airline industry of late is the rising fuel costs. The high fuel costs are anticipated to hurt Southwest Airlines' bottom line in the second quarter. Notably, economic fuel costs are projected at $2.20 per gallon, much higher than the year-ago figure.Undoubtedly, the above negatives substantiate the company’s Zacks Rank #5 (Strong Sell).

(Zacks Equity Research - Zacks)
Posted by Michael Carter at 11:51 AM