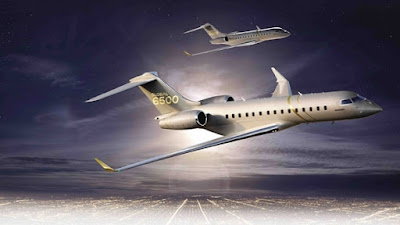 Two new additions to Bombardier’s Global family were unveiled on the eve of EBACE: the Global 5500 and 6500. The flight test aircraft is making a surprise appearance here powered by a new family of engines from Rolls-Royce, the Pearl, developed under cover and certified secretly in February.

The aircraft will be produced on the same line as the Global 5000 and 6000, which will continue to be available. The four models will offer mission, capability and price points to appeal to different customer requirements. First deliveries are planned by the end of next year.

Many new features ate incorporated into the new aircraft, including the cabin’s Ka-band connectivity, fibre-optic-based cabin management systems and Nuage seating that Bombardier developed especially for the Global family. They will not, however, be offered for the Global 5000 and 6000.

Other new features include a kitchen (“placed in the front of the aircraft, where it belongs,” says Bombardier), incorporating designer home features with high-end exposed appliances including a steam oven. New cabinets, and new countertops with the latest styling in mind, allow for more gourmet meal options. Next to the kitchen is a dedicated crew rest area.

David Coleal, president of Bombardier Business Aviation, told a packed unveiling event at the TAG Aviation FBO here on Sunday evening that the new aircraft contain many innovations, especially in the main cabin, which incorporates a club, conference and private suite.

“The passenger seats are something very special,” said Coleal. “We're extremely proud of our patented new Nuage seat. Nuage is French for "cloud," and this seat…is the first new seat architecture in business aviation in more than 30 years. In designing this revolutionary seat, Bombardier engineers and designers threw away the rulebook. It's the most comfortable seat in the skies and the perfect place to spend a long flight.

“It has a deep recline so you can rest comfortably, and a patented tilt-link system that automatically dips the base of the seat as the back reclines. The tilting headrest provides optimal neck support in every position. If you want to move around for a different view, or to network, these movements are intuitive and effortless thanks to the first-ever fully floating base, with no visible rails.”

The large conference suite contains another innovation: the Nuage Chaise. Built on the observation that many people sit on the credenza, Bombardier decided to make it more useful.

“As a flat surface, it's great for business meetings. It gives you the opportunity to have two or three people seated side by side, facing the conference table, like a full-size dining room. It then transforms into a modular seat, where you can recline, lie back and enjoy your flight like never before. It transforms the space into a serene lounge as well. No one else can bring such home-like comfort and luxury into the skies. We're proud to innovate and lead the way in passenger comfort.”

Coleal told ShowNews that the Global 5500 and 6500 will appeal to customers who find that moving up to a Global 7500 might be too big a step, yet they want the latest features.

“You get an amazing value proposition with the 5500 and 6500. They're category-killing aircraft because for all intents and purposes nobody can match them.”