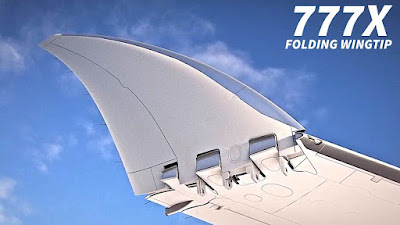 U.S. regulators have approved a Buck Rogers makeover of Boeing’s revamped 777 jetliner that will allow the tips of its massive wings to fold upward after landing so the plane can park at existing airport gates.

The new wings, the largest ever created by the Chicago-based planemaker, are taking shape as Boeing builds the first of its 777X jetliners in a factory north of Seattle. They will be the most distinctive-feature for the hulking jets, the first twin-engine models built to haul more than 400 travelers.

Once the new planes touch down, the tips of the wings will rotate until they’re pointed skyward, which will make it the only commercial jet in widespread use with such a hinged design. A set of locking mechanisms will make it impossible for them to retract while airborne, according to the company.

Because commercial aircraft design standards didn’t envision a foldable wingspan, U.S. regulators had to craft them from scratch. Those “special conditions” were approved Friday by the Federal Aviation Administration, according to federal documents.

The Boeing plane’s chief project engineer, Terry Beezhold, called it “this beautiful wing” in a recent video made by the company. “This airplane actually will be the most efficient twin-jet ever developed in commercial history,” Beezhold said.

Instead of aluminum, Boeing will make the new wings out of carbon-fiber composites, which are stronger and lighter than the metal they replace. That technology helps enable the company to extend the width of the wings by 23 feet (7 meters), or 11 percent beyond the existing 212 feet.

But the wing also created a new problem: The current 777s barely fit into the standard airport gate for long-range, wide-body aircraft. The wider wing on the new 777-8 and 777-9 planes would require airports to build new gates to accommodate the plane’s increased size.

“For that reason, we developed the folding wingtip, so that in flight we can enjoy this very long, efficient span, but it will be able to operate at any airport, any gate, that today’s 777 can service,” Beezhold said.

Boeing didn’t immediately respond to a request for comment on the FAA’s action.

The 777’s new wing will make it the company’s widest, passing the 747-8, according to Boeing documents.

Airbus's double-decker A380, the largest passenger jetliner, has a wing that’s 262 feet wide. Its size required some airports to build special gates where it could load passengers.

The FAA approval for the 777-8 and 777-9 came as Boeing is already assembling the first wings for the new models. The process is delayed because building structural ribs for the wings “has taken longer than expected up front,” program chief Kevin Bartelson told Aviation Week. Bartelson said the company expects to get the process back on schedule by this summer.

The hinge on the wing created a host of potential safety issues, the FAA said. In particular, several planes have crashed in recent decades when pilots accidentally tried to take off without properly configuring movable panels on wings called flaps. The same thing could happen with the new wingtips, according to the FAA.

One of the conditions the FAA imposed is that Boeing must have multiple automatic warning systems to ensure pilots won’t ever try lifting off without the wingtips fully extended.

The agency also said Boeing must demonstrate that the wingtips could never be accidentally unlocked during flight and that “no force or torque can unlatch or unlock the mechanisms.”

Among the 10 conditions set by FAA, the wings must also be able to withstand wind gusts as high as 75 miles (120 kilometers) an hour on the ground. The agency even set requirements for how to replace the normal lights at the tips of the wings.