Airbus CFO Wilhelm to Leave in 2019 Along With CEO Enders

Airbus Chief Financial Officer Harald Wilhelm will follow Chief Executive Officer Tom Enders out the door in April, deepening a shakeup of senior management as the European planemaker grapples with the future of the A380 superjumbo and a long-running bribery investigation.

Wilhelm, 52, decided “in agreement with the board of directors” that he will leave in April after 27 years at Airbus and its precursors, the Toulouse, France-based company said in a statement Monday.

While Enders said the departure signifies “no change of company strategy or equity story,” the move adds to the sense of upheaval at the highest levels of the manufacturing giant. 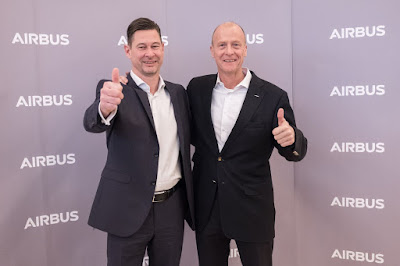 Airbus is already searching for a replacement for Enders, who decided in December that he would leave in April. His No. 2, Chief Operating Officer Fabrice Bregier, left after being passed over for the CEO job, while Marwan Lahoud, head of strategy, departed in 2016 and sales supremo John Leahy, a fixture at the company for decades, recently retired.

Though not someone who was expected to ascend to the top job after 18 years spent within Airbus’s finance division, Wilhelm is regarded as a safe pair of hands and someone prepared to assert the need for discipline in reining in problem projects.

The German national, who previously worked with Airbus precursor DaimlerChrysler Aerospace, played a big role in controlling spending on the A350 wide-body and was the first top executive to publicly question the future of the slow-selling A380. The A380 comments led to a clash with Leahy, who was still seeking to promote the model as the plane of the future. Bregier intervened as peace-maker. The aircraft has survived so far after a recent order from Dubai-based Emirates, but its future remains a challenge for the company without further orders.

Wilhelm’s plan to leave comes as Britain and France are investigating whether sales intermediaries, who helped the company sell planes, paid bribes to secure the deals. U.S. authorities have asked the company for information about the European probe to assess whether any of the alleged misconduct could fall within U.S. jurisdiction. Airbus has warned of “significant penalties” and newspapers have speculated that the fines could surpass $1 billion.

Wilhelm said in the release Monday that next year will be the “right time” to move on, adding that he remains “committed to the performance of the company” and will work with management to ensure a smooth transition to the next CFO.

Airbus’s board in March sought to assert control over the CEO succession as speculation mounted over whether the company would continue previous practice and appoint a French candidate to replace Enders, who is German, saying it would make the choice known by the year’s end but not comment before then.

The manufacturer, whose two biggest shareholders are the French and German governments, has hired a consultant to help with the process, and plans to submit the choice to investors at its 2019 annual meeting when Enders, who turns 60 in December, will step down.

(Phil Serafino and Christopher Jasper - Bloomberg Business)
Posted by Michael Carter at 6:01 AM