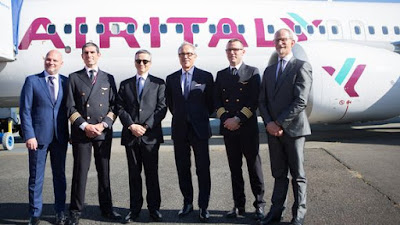 Air Italy officials and crew pose with the airline's first Boeing 737 MAX at a delivery ceremony in Everett, Wash., on May 11, 2018.
(Photo: Jeremy Dwyer-Lindgren, special for USA TODAY)

Air Italy took delivery of its first Boeing 737 Max on Friday at a ceremony in Everett, Wash., that featured the carrier’s brand-new livery.

Air Italy’s aggressive growth plan comes after Qatar Airways bought a 49% stake in the carrier in 2017, then known as Meridiana. But buoyed by the new backing from Qatar, Merdiana rebranded itself as Air Italy and adopted a new color palette that draws heavily from Qatar Airways’ signature maroon .

Qatar Airways CEO Akbar Al Baker, already known as one of the industry’s most outspoken leaders, also has been vocal about plans for Air Italy since his carrier bought its stake.

Air Italy is currently Italy’s No. 2 carrier, trailing perennially struggling Alitalia. But, Al Baker has made little secret that he hopes grow Air Italy into the nation’s top airline as Alitalia struggles through yet another bankruptcy reorganization.

Air Italy will make Milan Malpensa its main hub and plans to quadruple its fleet and passenger numbers by 2022. A new Milan-Bangkok route will launch in September, part of a broader effort to beef up both domestic and regional schedules. In the U.S. market, Meridiana had already revealed plans to launch non-stop service this year between Milan and both Miami and New York JFK.

Air Italy also talked of a “reinforced base” at Rome’s Fiumicino airport, where it also plans to add long-haul routes.

The 737 Max delivered to Air Italy on Friday will be used for shorter routes within Italy and Europe. But it’s the first aircraft to wear the new Air Italy livery that was revealed earlier this year.

“Since we first announced the striking new design at a press conference in Milan in February this year, there has been much anticipation for this moment,” Air Italy chairman Francesco Violante said in a statement. “We look forward to taking to the skies and bringing this aircraft to Italy for the first time.”

“We want to make Air Italy a success as a minority shareholder,” he told The Herald of Everett. “We want to make sure it’s highly successful and profitable, not only for Qatar Airways but for the Italian people.”