Norwegian is world's second airline to get Boeing's new 737 Max 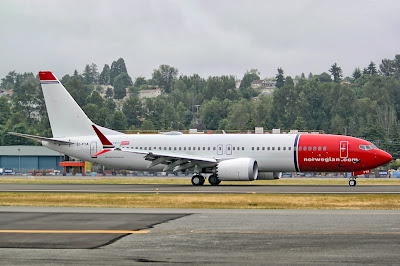 The deliveries were the first of the type to Norwegian Air, which has a total of 110 737 Maxes on order. The carrier expects to take four more of the jets – all the Max-8 variant – by the end of 2017.

Norwegian becomes just the second airline in the world get Boeing’s new 737 Max model. And, sometime next month, the airline will become the first to put the jet into regular service in the United States.

"It’s a major milestone,” Norwegian founder and CEO Bjørn Kjos said about taking the new 737 Max at delivery ceremony in Seattle on Thursday.

Norwegian has big plans for the aircraft

“The Max-8 will pave the road for a totally new concept,” Kjos added. “It gives us the ability to open up routes between the Europe and the U.S. on a totally new fare basis.”

Norwegian plans to use its new 737 Max jets to fly to Europe from small U.S. airports where costs are lower. Coupled with the fuel efficiency and economics of the modern Max-8, Kjos is betting that the Max will allow Norwegian to make money on niche routes like Providence-Cork, Ireland, and Newburgh, N.Y.-Edinburgh, Scotland.

Indeed, Norwegian has already launched the first of 12 such routes it will fly from Providence, Newburgh and Hartford, Conn. By the end of the summer, Norwegian will be flying non-stop from those U.S. cities to a half-dozen destinations in Ireland, Norway and the United Kingdom.

The Max is Boeing's updated version of its popular 737 family of jetliners, used mostly for medium and short-haul flights by airlines across the globe. This latest "Max" iteration marks the third major overhaul to the 737 since the program launched in 1967 and features new engines and other aerodynamic enhancements.

While current-generation 737s have the range to make short trans-Atlantic flights between eastern North America and western Europe, they often cannot take a full load of passengers or cargo on such routes. Norwegian had to launch the first of its 737 routes from the U.S. Northeast on current-generation 737s because of delivery delays to the Max, though it expects to have its Maxes flying on them by the end of the summer.

With the Max, airlines expect to be able to fly the jet on short trans-Atlantic routes without compromising on passenger or cargo capacity.

Norwegian is banking on that as it tries to make money flying “thin” U.S.-Europe routes that connect secondary markets. To facilitate its 737 Max growth, Norwegian is opening bases in both Providence and Newburgh for its U.S.-based 737 pilots.

In bigger markets, Norwegian is using a more traditional widebody jet – Boeing’s 787 – for long-haul flights on routes such as New York-London and Los Angeles-Barcelona.

“We have 14 of them flying (now) and by the end of the year 21 Dreamliners will be in operation,” Kjos says. “When they are finished in the next two years we will have 42 Dreamliners in operation.

As for the 737 Maxes that Norwegian is bullish on, the carrier became just the second in the world to receive the jet. Malaysian-based Malindo Air, a subsidiary of Indonesia’s Lion Air, became the first to get the Max in May. It now has taken four models of the jet.

In the U.S., Southwest is likely to become the next to take the jet. It has 200 on order and is expected to begin putting them in service this fall. American also is set to get them later this year.

eToro is the most recommended forex broker for beginner and full-time traders.