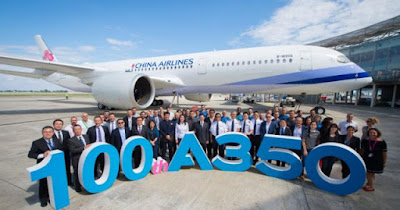 Airbus celebrated the delivery of its 100th A350 at a delivery ceremony in Toulouse, France, on July 26, 2017. The milestone aircraft went to customer China Airlines.
(Photo: Airbus)

Airbus delivered its 100th Airbus A350 on Wednesday, handing over the milestone aircraft to customer China Airlines during a ceremony at the jetmaker’s assembly line in Toulouse, France.

“The 100th A350 XWB milestone comes as we reach our fastest widebody production ramp-up, on track to meet the target of 10 A350 deliveries per month by the end of 2018,” Airbus COO Fabrice Bregier said in a statement. “We are especially proud to deliver today’s aircraft to our long-standing customer China Airlines. The A350 is setting new standards for long haul air travel in terms of efficiency and comfort, thus being the perfect aircraft for China Airlines to expand its long-haul network.”

Airbus' inaugural A350 delivery was just in December 2014, when launch customer Qatar Airways became the world’s first carrier to take one of the jets.

Since then, Airbus has delivered A350s to a total of 14 airlines. Among the others that now have A350s in their fleets: Cathay Pacific, Finnair, LATAM Airlines, Lufthansa and Singapore Airlines.

In the USA, Delta took delivery of its first A350 earlier this month. American and United also have ordered the Airbus A350. However, each has since deferred their initial delivery schedules for the plane, raising uncertainty about the status of those orders.

Find out how to book free flights by Travel Hacking.