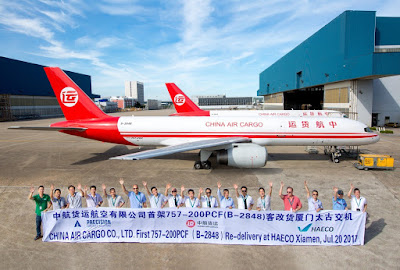 Eight months ago, we reported that startup Chinese all-cargo carrier China Air Cargo Co. Ltd was about to take to the skies. It had taken re-delivery of its first freighter – a Precision-converted 757-200PCF, and was within weeks of receiving its Operating Certificate.

As is often the case, the final step, the dotting of the last “I” and crossing of the last “t” on the AOC, took months, not weeks, and that first freighter stayed on the ground at the HAECO facility in Xiamen (XMN) where it was converted, with ceremonial re-delivery temporarily on hold.

China Air Cargo Co Ltd, a joint venture of Joy Air Holding, Guangzhou Donlinks Group, and Beijing Fuda Asset Management, received initial approval from the Civil Aviation Authority of China in late 2015, but, in mid-2016, the CAAC put the approval process for new airlines on hold, partly to weed out applications from carriers trying to use the relatively easy path to all-cargo certification with the intent of switching to passenger operation following approval, and China Air Cargo was left in limbo.

The CAAC eventually lifted its hold, but, as mentioned above, the approval process for China Air Cargo Corp did not happen overnight, and it is only now that the company feels confident enough in being able to fly “soon” that it has held a formal re-delivery celebration.

As to the carrier’s plans for the aircraft, nothing has been announced, but Cargo Facts believes China Air Cargo will, initially at least, fly in support of one of the big Chinese express companies.