United has ordered a total of 18 777-300ERs since the beginning of 2015, just as Boeing has been preparing to phase out this model.

In the past few years, order activity for Boeing's 777-300ER wide-body jet has cratered. Airlines have postponed purchases of long-haul planes for a variety of reasons. Some have extended the lives of older jets due to lower fuel prices; some have reduced their growth rates due to weak demand; others are waiting for next-generation models to become available.

However, Boeing has recently found one new fan of the 777-300ER: United. By the end of this year, United will operate 14 Boeing 777-300ERs. It even ordered another four last month.

The 777-300ER entered service in 2004, nearly a decade after Boeing delivered the first member of its 777 family -- the 777-200 -- to launch customer United Airlines. Since then, the 777-300ER has become by far the most popular member of Boeing's first-generation 777 family, with more total orders than the other five family members combined. 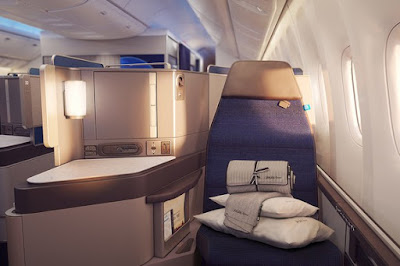 Yet United Airlines and its eventual merger partner Continental Airlines were both retrenching for most of the decade beginning after 9/11. Thus, while they operated more than 70 Boeing 777s combined, neither one ordered the larger 777-300ER model.

It wasn't until 2015 that United Airlines finally decided to order the 777-300ER. In the midst of an order slump for the 777, Boeing offered a very good price for United to convert 10 of its existing 787 orders to the 777-300ER. United intended to use those planes to add seats on popular routes from its capacity-constrained hubs, such as Newark and San Francisco.

By early 2016, United had changed the proposed mission for its 777-300ERs -- and ordered four more. It now plans to use them primarily to replace its aging fleet of Boeing 747s, which will be fully retired within the next few months. Most recently, United tacked on an order for yet another four 777-300ERs to its recent order for Boeing's new 737 MAX 10.

United goes the other way on the A350

Before ever buying a 777-300ER, United had ordered 35 A350-1000s from Airbus, with plans to use them as a 747 replacement. Now that the 777-300ER is filling that role, United seems to be losing interest in the similarly sized A350-1000. In the past year, United Continental CFO Andrew Levy has mentioned on several occasions that the company might want to convert its A350-1000 orders to smaller models.

It's interesting that United appears to favor the 777-300ER over the A350-1000, a newer, more fuel-efficient model. To some extent, its fleet decision may have been driven by the fact that the 777 was available earlier. (United had planned to keep most of its 747s until around 2020, but rising maintenance costs forced it to quickly change course and the A350-1000 isn't ready yet.)

United new 777-300ERs will also fit well with the carrier's large existing fleet of 777s for training and maintenance purposes. Lastly, United probably got very favorable prices for these purchases from Boeing, which has been struggling to fill empty 777 production slots.

Reaching the end of the line

The 777-300ER is the right airplane at the right time for United. While it's an older-technology plane, it will still have very low unit costs in United's 366-seat configuration, which is enabled by an innovative new business class seat design. (For comparison, American Airlines only has 310 seats on its 777-300ERs.)

I don't expect United to come back and place another repeat order for 777-300ERs in the coming years. The carrier already has enough orders to replace nearly all of its 747s, after accounting for the 777's higher reliability. Meanwhile, persistent overcapacity in most international markets makes this a bad time to introduce significantly larger planes on long-haul routes.

Nevertheless, while United may not buy any more 777-300ERs, its interest in the aging model probably bodes well for Boeing's efforts to find other buyers for the last few dozen current-generation 777s before production fully switches over to the new 777X family.


(Adam Levine-Weinberg - The Motley Fool)
Posted by Michael Carter at 9:26 AM

eToro is the ultimate forex broker for rookie and professional traders.