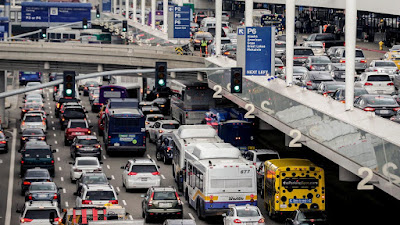 Traffic jams the central terminal area at LAX during the holidays last year. Airport officials hope to reduce the congestion with a $5-billion ground transportation improvement plan that is now being challenged in court.
(Irfan Khan / Los Angeles Times)

A parking lot operator has sued the City of Los Angeles in an attempt to overturn approval of $5 billion in ground transportation improvements that are part of the ongoing modernization of Los Angeles International Airport.

TPS Parking Century and TPS Parking Management, which run the Parking Spot near LAX, allege that the environmental impact report for the so-called Landside Access Modernization Program fails to adequately address the potential effects of the project and how to mitigate them.

Filed late Friday in Los Angeles County Superior Court, the lawsuit seeks an order to set aside the airport commission’s approval of the project, require Los Angeles World Airports to revise the environmental analysis and recirculate it for public review if more severe impacts are discovered.

LAX officials plan to reduce traffic congestion in and around the airport with an automated people mover in the central terminal area and two transportation centers east of the airport to handle shuttle buses, taxis and travelers using a new light-rail connection.

The access program also calls for construction of new roads and the improvement of nearby streets to serve the transportation centers and a consolidated car rental facility to be built in Manchester Square. Sepulveda, Aviation and West Century boulevards, 98th Street and West Arbor Vitae Street are some of the major thoroughfares to be upgraded.

TPS alleges that the city and Los Angeles World Airports have violated the California Environmental Quality Act, which requires thorough studies of a project’s environmental impacts and the possible ways to reduce those effects.

The lawsuit contends the access program’s environmental review failed to adequately describe the project and does not fully analyze potential traffic congestion, the impacts on street intersections, cumulative impacts and the growth-inducing effects of the project.

Though LAX officials do not comment on pending litigation, Trevor Daley, the chief of external affairs for Los Angeles World Airports, said that the project’s environmental impact report fully complies with state law and that extensive public outreach was done.

“This is a clear attempt for the Parking Spot to preserve their parking revenue by slowing down this important project that moves passengers efficiently,” Daley said.

LAX — the nation’s second-busiest airport — is in the middle of a $14-billion renovation that includes the ground transportation plan, remodels of domestic terminals, an extensive upgrade of the Tom Bradley International Terminal, a new midfield concourse for airline service, and runway and taxiway improvements.