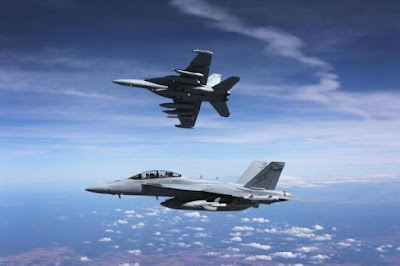 RAAF Amberley, located in the state of Queensland, now has a complement of 12 two-seat Growlers. The first two aircraft arrived in Australia in February.

"We are the only country outside the United States operating the EA-18G Growler and the full fleet arrival represents a significant leap forward in joint electronic warfare capability," Minister for Defense Marise Payne said.

"The EA-18G Growlers will work with Army and Navy to deliver a networked joint force able to maneuver and fight in the electromagnetic spectrum."

"Australian Growlers have already conducted successful weapon firings and integration flights with RAAF F/A-18F Super Hornets and US Navy EA-18G Growlers as part of Operational Test and Evaluation," added Air Vice Marshal Steven Roberton. "Through our partnership with the US Navy we are already planning to keep Growler at the forefront of electronic attack capability throughout the life of the aircraft."

The Growler is based on the F/A-18F Super Hornet. It is outfitted with additional avionics, enhanced radio frequency receivers, improved communications and radio-frequency jamming pods.