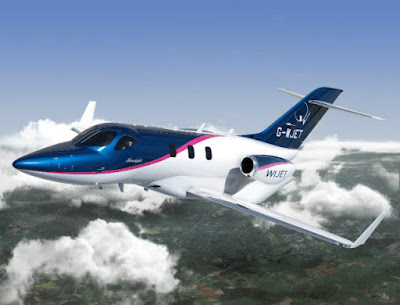 European air taxi operator Wijet has placed a record order with Honda Aircraft for 16 HA-420 HondaJets, as part of a fleet upgrade and expansion program.

Deliveries are scheduled to begin in March and all the light business jets should be in service within 18 months, says Wijet chief executive Patrick Hersent. "The HondaJets will replace some of our 15 [Cessna] Citation Mustangs, which have an average age of around seven years," he says.

Established in 2009, Wijet is one of the world’s oldest and largest operators of the out-of-production Mustang. Cessna halted manufacture of the entry-level aircraft in May 2017, following feeble demand for the all-metal type.

While 470 Mustangs were built over the type's 12-year production run, Flight Fleets Analyzer shows a steady slide in deliveries, from a peak of 128 units in 2009 to only eight in 2015. Cessna recorded seven Mustang shipments in the first half of 2017.

Hersent says the four-passenger business jet still has an important role to play in Wijet's plans. A clutch of aircraft will be used to supplement the HondaJet fleet, to help meet the burgeoning demand across Europe for ad hoc charter.

"The Mustang can operate from shorter runways than the HondaJet, including from our headquarters at Blackbushe airport in the south of England, which the HondaJet cannot," he says. "We will therefore base our new aircraft at London Biggin Hill, where Honda is planning to establish a maintenance center to support the fleet."

The HondaJet has a larger cabin than the Mustang, with seating for five passengers, Hersent notes. It also boasts a range of over 2,000nm (3,700km) – 300nm longer than the Cessna– "putting several Nordic and North African destinations within reach", he adds.

Honda Aircraft secured European certification for the HondaJet in 2016. Fleets Analyzer records seven examples as operating in the region, out of a global fleet of just under 70.

The Greensboro, North Carolina-based airframer is progressively ramping up production of the GE Honda Aero Engines HF120-powered type to meet market demand. Deliveries climbed from 23 units in 2016 to more than 43 last year, and the company expects a "steady" increase in output in 2018.

Posted by Michael Carter at 2:08 PM