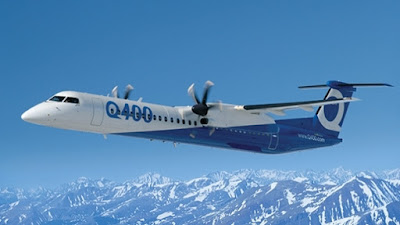 Tyrolean Technik, a fully owned subsidiary of Austrian Airlines, will downsize its Innsbruck maintenance and repair operations (MRO) by the first half of this year by terminating MRO work on the Bombardier Dash 8 Q400 as business declines and cost rises for the type.

A spokesperson told ATW the company is considering transferring its Q400 MRO business to either Lufthansa Technik (Malta or Sofia) or Austrian Technik Bratislava.

Aircraft line maintenance will continue to be carried out locally.

“Due to increasing passenger volumes, the deployment of this very special and small aircraft type has been on the decline for years. This situation is intensified by the decreasing number of maintenance orders and uncertainties in the field of heavy maintenance, most recently triggered by the [2017] Airberlin bankruptcy,” Tyrolean Technik co-managing director Wolfgang Henle said in a statement.

Airberlin operated Dash 8s and was one of the biggest customers at the Innsbruck site.

The move affects 80 out of 110 Innsbruck workers.

“We have been assessing the situation for a long time. The bottom line is that we cannot bear the millions in additional costs for heavy maintenance, so we have decided to downsize operations in Innsbruck,” CEO Kay Kratky said. “We have offered a job in Vienna to all affected employees.”


(Kurt Hofmann - ATWOnline News)
Posted by Michael Carter at 10:36 AM

Hello Everybody,
My name is Mrs Sharon Sim. I live in Singapore and i am a happy woman today? and i told my self that any lender that rescue my family from our poor situation, i will refer any person that is looking for loan to him, he gave me happiness to me and my family, i was in need of a loan of S$250,000.00 to start my life all over as i am a single mother with 3 kids I met this honest and GOD fearing man loan lender that help me with a loan of S$250,000.00 SG. Dollar, he is a GOD fearing man, if you are in need of loan and you will pay back the loan please contact him tell him that is Mrs Sharon, that refer you to him. contact Dr Purva Pius,via email:(urgentloan22@gmail.com) Thank you.