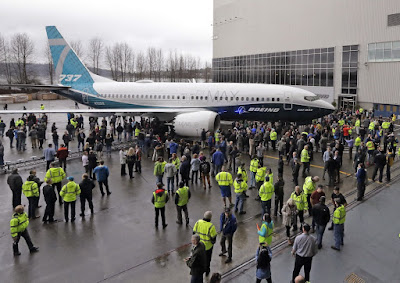 The new Boeing 737 MAX 7 is displayed during a debut for employees and media of the new jet Monday in Renton.
(Elaine Thompson/AP)

Boeing rolled out the third and smallest member of the new 737 MAX jet family, the 737 MAX 7, at its Renton plant Monday.

While overall the MAX family has sold extremely well, with more than 4,200 ordered, sales of the MAX 7 model have been very slow, despite a redesign in 2016 that stretched the fuselage to add two extra rows of seats.

This model is a shrunken version of the MAX 8, and is less fuel efficient on a per-seat basis. It faces competition from Bombardier’s all-new CSeries CS300 aircraft, which has lower fuel and operating costs.

Airbus, which is in the process of acquiring the CSeries jet family, said it will market the CS300 in preference to its own A319.

The only airline customers for the MAX 7 so far are Southwest Airlines, Westjet of Canada, Chinese carrier Ruili Airlines, new Canadian low-cost entrant Jetlines and airplane lessor Air Lease Corp. — and Southwest recently deferred deliveries of 23 of its MAX 7s by four years.

Flight tests of the MAX 7 should begin in the coming days, before first delivery next year.

(Dominic Gates - Seattle Times)
Posted by Michael Carter at 10:58 AM