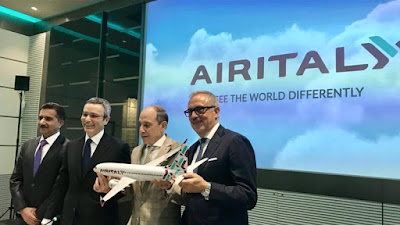 It is now the country's second-largest airline behind Alitalia, which was mainly backed by Abu Dhabi-based Etihad Airways.

However, the carrier started bankruptcy proceedings last year for the second time in a decade, after saying it will no longer invest in the faltering airline.

"We will show that we are the star," said al-Baker, presenting the airline's development plans in Italy.

Over the next three years, 20 Boeing 737 MAX aircraft will be added to Air Italy's fleet, the first of which arrives in April.

Qatar Airways will lease five of its Airbus A330-200 aircraft to Air Italy "at market prices", al-Baker said.

(Al Jazeera News)
Posted by Michael Carter at 11:53 AM