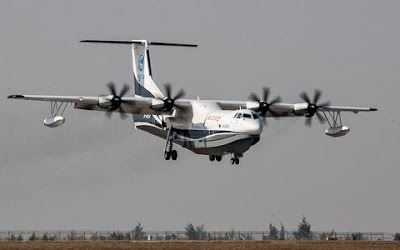 The AG600 approaches the runway in Zhuhai
(Photo: Reuters)

The world’s largest amphibious aircraft, the China-made AG600, made its maiden flight on Sunday, and comes as the latest milestone in the country’s efforts to modernize its military.

State television showed live images of the AG600 lifting off from Zhuhai airport in the southern province of Guangdong, which sits on the South China Sea coast.

It returned about an hour later and taxied to its stand accompanied by martial music and greeted by crowds waving Chinese flags.

Xinhua news agency said the aircraft was the "protector spirit of the sea, islands and reefs".

China has stepped up research on advanced military equipment as it adopts a more muscular approach to territorial disputes in places such as the disputed South China Sea, rattling nerves in the Asia-Pacific region and the United States.

Powered by four turboprop engines, the AG600 can carry 50 people during maritime search-and-rescue missions, and can scoop up 12 metric tons of water within 20 seconds for fire fighting trips, according to state media.

It had previously been scheduled to make its first flight earlier this year but it is unclear why it was delayed after ground tests took place in April.

State-owned Aviation Industry Corp of China (AVIC) has spent almost eight years developing the aircraft, which is roughly the size of a Boeing Co 737 and is designed to carry out marine rescues and battle forest fires.

However, state media has also noted its potential use in the South China Sea, where China, Vietnam, Malaysia, the Philippines, Taiwan and Brunei all have overlapping claims.

The AG600's chief designer, Huang Lingcai, was quoted in the official China Daily earlier this month as saying it can make round trips without refueling from the southern island province of Hainan to James Shoal, claimed by China but which is located close to Sarawak in Malaysian Borneo.

The aircraft has received 17 orders so far from Chinese government departments and companies. It has a maximum flight range of 2,800 miles and a maximum take-off weight of 53.5 tons.

It can use conventional airports and also land and take-off from the sea.

China is in the midst of a massive military modernization program, ranging from testing anti-satellite missiles to building stealth fighters and the country's first indigenous aircraft carrier, to add to an existing one bought from Ukraine.

(Mike Wright - The Telegraph)
Posted by Michael Carter at 11:00 AM