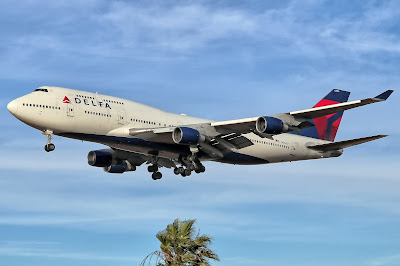 Delta Air Lines has added stops in Los Angeles and Paine Field near Seattle to the farewell tour for its final Boeing 747.

The new stops are in addition to the Detroit-Seattle, Seattle-Atlanta and Atlanta-Minneapolis/St Paul flights from 18-20 December that were previously announced. The flights are only open to booking by employees and members of Delta's frequent flier program.

Delta is the last remaining scheduled passenger operator of the 747 in the USA, following United Airlines last revenue flight between San Francisco and Honolulu on 7 November.

The SkyTeam Alliance carrier will operate its last regularly scheduled 747 flight from Seoul Incheon to Detroit on 17 December.

(Edward Russell - FlightGlobal News)
Posted by Michael Carter at 9:57 AM