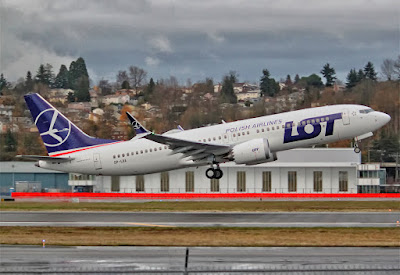 Boeing and LOT Polish Airlines celebrated the delivery of the first 737 MAX for the carrier, ushering the new and improved 737 airplane into the central and east Europe market. The jet is also the first MAX placed by leading airplane lessor Air Lease Corporation.

LOT, the Polish flag carrier, plans to take delivery of additional MAX airplanes as part of its strategy to profitably grow its airline.

"We are proud to be one of the first carriers in the world with the state-of-the-art Boeing 737 MAX aircraft in our short- and middle-haul fleet," said Rafal Milczarski, chief executive officer, LOT Polish Airlines. "We are already one of the fastest growing European airlines and I am certain that this big step forward will help us achieve our goals of increasing our operational effectiveness and improving our service.

With the most modern Boeing 787 Dreamliners and brand new 737 MAX we are the most comfortable airline for our customers, more cost efficient and last, but not least, friendlier to the environment. Thanks to the cooperation with our partners, LOT is again one step ahead to set the tone for shaping the future of aviation industry in our region."

The 737 MAX delivers the highest efficiency, reliability and passenger comfort in the single-aisle market by incorporating the latest technology CFM International LEAP-1B engines, Advanced Technology winglets, the Boeing Sky Interior, large flight deck displays, and other improvements. The efficiency gains helped make the MAX the fastest selling airplane in Boeing history with more than 4,000 orders to date from 92 customers worldwide.

"We are very pleased to announce this first 737 MAX lease placement with LOT, which is the first of six new 737 MAX 8s on long-term lease to the airline. The MAX 8 offers new efficiencies and an enhanced passenger experience that will better serve LOT's growing route networks," said Steven F. Udvar-Hazy, Air Lease Corporation's Executive Chairman. ALC has 129 more 737 MAX airplanes on order.

"LOT has been a valued customer for decades and we are delighted that it has become one of the first operators of the MAX in Europe," said Monty Oliver, vice-president Europe Sales, Boeing Commercial Airplanes. "The 737 MAX will provide LOT unmatched efficiency, range, reliability and operating costs all while continuing to provide a premium on-board experience for its passengers."

Apart from the six 737 MAX 8s, LOT plans to expand its fleet of super-efficient and passenger-pleasing Dreamliners by adding four more 787-9s by the end of 2019.

The airline is using the new airplanes to grow its network. Since 2016, LOT has announced the launch of 42 routes, including long-haul service from Warsaw to Los Angeles, Newark and Kraków to Chicago. In May 2018, LOT will launch connections from Warsaw to Singapore as well as from Budapest to New York City and Chicago