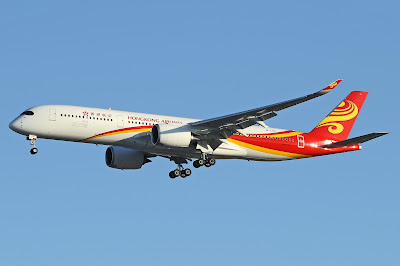 Hong Kong Airlines has opened a new service from Hong to Los Angeles, the carrier’s first US route operated by the Airbus A350.

The Hong Kong-based carrier ordered 21 A350s and has taken delivery of three of the type, which is set to become the backbone of the airline’s long-haul fleet.

“The launch of our new service to Los Angeles represents another step of our transition from a regional carrier to a global airline,” vice chairman Tang King Shing said in a statement. “As a popular destination for both leisure and business travel, Los Angeles is also one of the most substantial economic engines within the United States.” 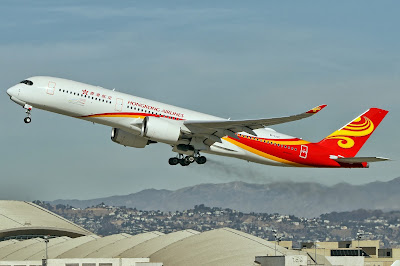 Departing back to Hong Kong on December 18, 2017.
(Photo by Michael Carter)

The carrier operates 35 aircraft that includes 33 passenger airliners and two freighters with an average fleet age of five years.


(Katie Cantle - ATWOnline News)
Posted by Michael Carter at 7:05 AM