MRJ’s first delivery to ANA delayed by another year 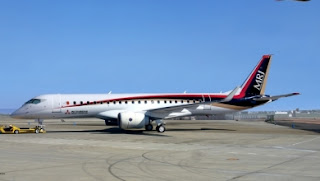 Mitsubishi Aircraft Corp. has announced another major delay to the service introduction of its Mitsubishi Regional Jet (MRJ).


At a Dec. 24 press conference in Nagoya, Japan, Mitsubishi Aircraft and its largest stakeholder, Mitsubishi Heavy Industries, said first delivery to launch customer All Nippon Airways (ANA) would move from the 2017 second quarter to “approximately one year later.”
This is the third major delay of first delivery. The original program schedule called for first flight in the second quarter of 2012 and first delivery in the first quarter of 2014. First flight, delayed multiple times, actually occurred only last month.
As recently as last month, Mitsubishi Aircraft president Hiromichi Morimoto said first delivery to ANA was on track for the 2017 second quarter. ANA called the latest delay “disappointing,” but added that it remains “confident of the benefits the MRJ will bring to the ANA fleet.”
“The first flight and the subsequent flight tests have confirmed the basic characteristics to be satisfactory,” Mitsubishi Aircraft said in a Dec. 24 statement. “However, we also have recognized several issues as we attempt to accelerate our development. In order to tackle these issues … we have reviewed and revised our overall schedule.”
The precise nature of the issues was not revealed. However, as a result of static tests, strengthening of the airframe and upgrading the aircraft’s software are already underway.
“Specifically, in the progress of our engineering work together with experts in the United States, we have made additions to and revisions of test items in order to complete a better-integrated aircraft,” Mitsubishi Aircraft said.
“These have been reflected in the new delivery schedule. In addition, we have undertaken an overall review with our partners, and reflected this in our development schedule.”
A diagram released at the press conference showed considerably extended flight-test periods in both Japan and the US, where four of the five flight test aircraft are slated to move after initial flying in Japan.
All five flight test aircraft are MRJ90s. Testing in the US, initially slated to start in the 2016 second quarter, has now been delayed until roughly the end of 2016.
“Looking ahead, we will be managing our milestones, and increasing the precision of our schedule as we progress,” Mitsubishi Aircraft said.
“We will also carry out the flight test campaign in North America as soon as feasible and assign the roles and responsibilities of the three engineering bases (Mitsubishi Aircraft Headquarters, Seattle Engineering Center and Moses-Lake [Washington state] Test Center) for prompt execution in all fields.
We remain firmly committed to providing our customers with better-integrated aircraft with higher levels of safety and reliability, as well as high-quality services.”
(Alan Dron - ATWOnline News)
Posted by Michael Carter at 10:50 AM