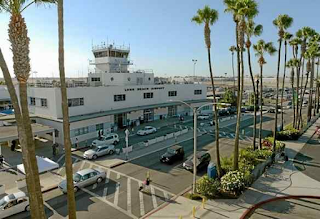 Long Beach officials will allow an increasing number of commercial flights at the city’s airport for the first time since a major city law limiting noise — and flights — was adopted 20 years ago.

Because the airlines have kept noise down, the additional flights can be added without exceeding maximum allowable decibel levels, Francis said.

During a City Council study session Tuesday, Francis said extra flights should be permitted because airlines are moving toward newer, quieter aircraft, and noise surveys from the past three years show LGB noise levels falling below allowable levels.

“We have now established a trend,” Francis said.

On the flip side, should the new flights exceed noise maximums, the airport will have to cut back, with the noisiest operators being the first to go, said Assistant City Attorney Michael Mais.

No say for council

Jet noise is often a touchy issue among people who live near airports, and several residents showed up at Tuesday’s meeting to make it clear that they’re not happy about the prospect of heightened activity at the airport. Some council members agreed.

“I’m not thrilled at this news and potential action,” said Councilman Al Austin, who represents a district that includes Bixby Knolls and parts of North Long Beach below LGB flight paths.

But he and other council members don’t have much influence over the matter, Mais said in a telephone interview before Tuesday’s meeting.

The city’s 20-year-old airport noise law resolved some 12 years’ worth of legal disputes between City Hall and airlines over flight limits and does not give the council discretionary power over the number of flights allowed at LGB.

Instead, the law requires the airport’s director to assess whether airlines are operating within the constraints of what is essentially a budget for the allowable aircraft noise. The law does feature an appeals process, but Mais said a successful appeal would require proof technical studies projecting decibel levels were flawed.

In the 20 years since Long Beach’s ordinance was adopted, it has never been amended. Mais said the city’s legal team has worked under the assumption the law should not be changed. He said the law gives Long Beach officials a significant degree of local control compared to other U.S. cities that operate airports, and there’s little appetite to risk loss of that autonomy.

Francis said airport officials can soon advertise the availability of additional flights to any airline operating in the United States.

JetBlue Airways Corp. is the primary airline at LGB and its executives have asked for permission to apply for a U.S. Customs facility that would allow for international flights to arrive at and depart from Long Beach.

The council voted in July to commission a feasibility study on international flights.

“The timing on that couldn’t have been worse — or better,” he said.