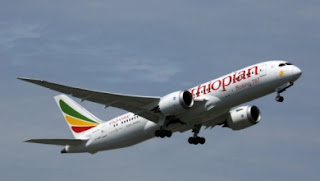 
Ethiopian Airlines—which is one of the first Boeing 787-8 operators—has ordered two Boeing 787-9s for delivery in 2017, CEO Tewolde Gebremariam told ATW. In addition, he said the Addis Ababa-based carrier is “also studying the Boeing 777X.”
Speaking on the sidelines of the Star Alliance executive board meeting in Chicago, Gebremariam also told ATW Ethiopian plans to order 11 additional Airbus A350 XWBs, taking its total from 14 to 25, which will be used initially on European and Asian routes.
He also revealed the carrier plans to launch Addis Ababa-New York services in 2016. “We have not decided if we will route this flight via Dublin, or we use Lome, Togo, as a stop. Service will be 3X- or 4X-weekly on board a Boeing 787.”
The Star Alliance member already operates to Washington Dulles, Toronto and Los Angeles in North America. “The recently launched Addis- Dublin-Los Angeles service is doing OK, but it is a seasonal business,” he said.
Gebremariam said Ethiopian must grow faster to build a minimum critical mass, an economy of scale by 2025. “It is a challenge. We have to make sure that routes in Africa are complemented with routes with Europe, Asia as well North America. By 2025, we should operate 140 aircraft.”
Under Ethiopian’s Vision 2025 strategic plan, it is establishing itself as an aviation group with seven business units—international airline, regional airline, cargo, MRO, aviation academy, catering services and ground services. Collectively, by 2025, these units should be generating about $10 billion in revenue.
“The next step, for example, is to develop the route from Japan, South Korea and China as well as India to São Paolo. It is geographically a straight line via Addis and the fastest way from Asia to South America leads over Ethiopia,” Gebremariam said.
Additional, new destinations will be Jakarta and a further city in China—either Chongqing or Chengdu. He said a comeback in Singapore is also planned, as well as Oslo (Norway), Mauritius and Durban (from next week) coming online in the near future.
Separately, Gebremariam said its Addis Ababa Bole International Airport hub has become a bottleneck during peak times and will undergo a $250 million expansion, which should be completed in 2017 or 2018.
(Kurt Hofmann - ATWOnline News)
Posted by Michael Carter at 5:13 PM