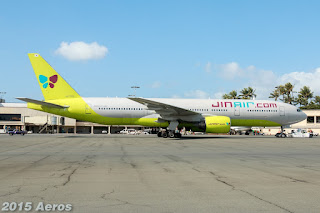 South Korean low-cost carrier (LCC) Jin Air has begun a new 5X-weekly schedule from Seoul’s Incheon International Airport to Honolulu, Hawaii. The service will use Boeing 777-200 aircraft, and is initially planned for operation over the peak holiday period, from December through March 2016.

Honolulu has seen a spate of recent route announcements from operators—including Filipino LCC Cebu Pacific, Korea’s Air Busan and Kuala Lumpur-based AirAsia X. All have mooted plans to fly to Hawaii from Southeast Asia, and have applied the US Department of Transportation (DOT) for permits earlier this year.

Cebu CEO Lance Gokongwei recently announced the carrier’s first flights to the US with a Manila-Guam service, which will launch in March next year. He said the service would be the first step on “an expansion path across the Pacific.”

Air Busan applied to the US DOT for a US flight permit earlier this year, citing both West Coast and Hawaii as potential destinations. Additionally, AirAsia CEO Tony Fernandes tweeted in February that the group was looking to expand its long-haul schedules, saying it was “closing in on European routes … and also application process [to] Hawaii.” As yet, neither carrier has given firm dates for services to begin.

The Hawai‘i Tourism Authority (HTO) said that the opportunities in Hawaii for southeast Asian tourism were “huge,” and added it has specifically targeted Indonesia, Malaysia, Singapore and Thailand as key markets.

“For eight consecutive months [to October 2015], visitor arrivals [saw] an increase of 4.2% over the same period last year,” said HTO CEO, George D. Szigeti, adding that the HTO was involved in ongoing talks with international marketing partners  “to monitor … their respective regions.”


(Jeremy Torr - ATWOnline News)
Posted by Michael Carter at 11:13 AM