I picked-up my last 28 rolls of K64 to be processed this past Tuesday December 28 and what a strange feeling it was. Knowing that I would never put another roll of this wonderful film in my Canon EOS 3 or impatiently wait two weeks to see the results of a trip to a local airport or a far away destination..........it truely is the end of an era. I hope you enjoy the story below as much as I did..............Cheers.......Michael Carter 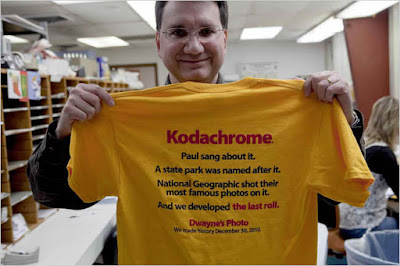 An era now ends. No, no, I'm not referring to the closing of 2010. That's routine stuff. It's a more important era that ends. Today, December 30, 2010, marks the death of Kodachrome, the Eastman Kodak product that, more than any other, defined and made possible the age of color photography. Death came at the incredible age of 75, one of the longest runs for a product in commercial history.

Kodak stopped making Kodachrome in 2009, and stopped making the chemicals needed to process it, a complex process that could never be done in home darkrooms. Kodachrome had been pushed aside by the replacement of home movie cameras by digital camcorders, and the collapse of the color-slide market. Today, in Kansas, the world's last remaining Kodachrome processing lab shuts down. The end. Forever.

Many of us grew up on Kodachrome. We watched our parents' home movies, and shot some ourselves. We sat fascinated as our family slide projectors flashed one Kodachrome slide after another on our home screens. Nothing can replace those large, rich images. Nothing. Yes, they'll still make color slide films and movie film, even as digital devices steamroll over film-based photography. But Kodachrome had qualities no other film ever had. Among most photographers, it was the world standard in accuracy, sharpness and lack of grain.

More important, Kodachrome movies and slides lasted. In our family, we have movies and slides dating back almost 65 years that show no signs of fading. Their color is as rich as it was when the film was returned from the developing lab. And there is something very special about taking a movie reel or slide out of a drawer, knowing that the very film you're holding, that physical film, was in a parent's or grandparent's camera, and was loaded, touched, by that parent's or grandparent's hands.

The story of Kodachrome is a romance itself, an odd intersection of the worlds of science and music. It began in 1917 when two teenagers, Leopold Godowsky Jr., and Leopold Mannes, went to an early "color" movie called "Our Navy." They thought the color was awful, and, despite their intense musical studies, decided to try to improve on it. Godowsky was the son of renowned pianist Leopold Godowsky. Mannes was the son of the founders of New York's prestigious Mannes College of Music.

The boys started working on their own color process. Although Godowsky enrolled at UCLA, and Mannes at Harvard, their photographic work continued nonetheless. Eventually, Godowsky, by now a working violinist, moved back east. He and Mannes patented one color process, but it was not commercially viable. Then, on his way to perform in Europe in 1922, Mannes happened to meet a partner in the banking firm of Kuhn, Loeb and Company, who became intrigued with Mannes's description of the work he and Godowsky were doing. The partner sent a young associate, Lewis Strauss, to the Mannes apartment to view the progress. Strauss was convinced, and Kuhn, Loeb invested.

With financial backing, Godowsky and Mannes built their own lab, and won more patents. By 1930 Kodak was so impressed that it lured the young musicians to Rochester to work with Kodak scientists. Within five years, Kodachrome was born, and the age of real, accurate, and practical color photography began. By 1936, Kodachrome was in the American home.

Lewis Strauss, the young banker who arranged financing for the boys, remained fascinated with science, and went on to become chairman of the Atomic Energy Commission in the Eisenhower administration.

Both Leopold Godowsky Jr. and Leopold Mannes returned to music, Godowsky becoming a respected violinist, sometimes performing with his father, and Mannes becoming president of the Mannes College of Music.

And...Leopold Godowsky Jr. married Frances (Frankie) Gershwin, the younger sister of George and Ira Gershwin, which is why some people in photography, vaguely familiar with the story, sometimes ask about "the Gershwin who invented Kodachrome."

I will look at some of my Kodachrome slides tonight. No, no, they can't take that away from me.

Posted by Michael Carter at 1:42 PM

thanks for this good history.