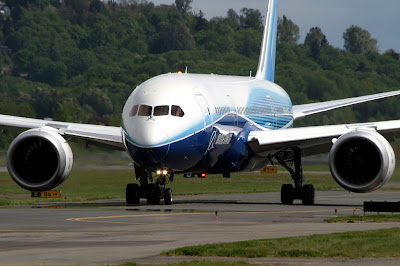 Boeing Corporate President and CFO James Bell said that as of the fourth quarter the 787 program was not in a loss position, although "the cumulative impact of 787 schedule revisions has put pressure on program profitability." The early 787 and 747-8 deliveries will be delivered at "potentially zero margins," Bell said.

Commenting on a possible 737 successor or a re-engining, McNerney said, "For me, putting our [existing 737] backlog at risk twice—once with a re-engining … and then again with a new airplane—only makes sense if the new airplane wants to be developed in 2025 or beyond…. We're leaning toward development in the 2020 timeframe."

Congratulations on your blog Aero Pacific. Am Maikson, editor of Aviation blog In Manaus, Brazil, and also follow his blog. I would love to be a partner of Pacific Aero. would be happy to have more friends in aviation beyond the borders of Brazil. I await your response. And we visit www.maoaviation.blogspot.com; is always welcome to our blog!

Hugs from Manaus and Brazil