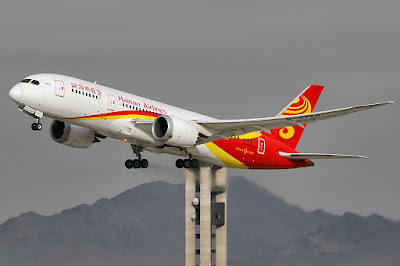 China’s Hainan Airlines is applying to the US Department of Transportation (DOT) to open routes this year from Chongqing to Los Angeles in the first quarter and New York JFK in the second quarter.

The carrier plans to operate these two routes 8X- or 9X-monthly using a Boeing 787.

The two routes have been approved by the Civil Aviation Administration of China (CAAC), which may mean a lost opportunity for Air China, which also applied to the CAAC to operate Chongqing-Los Angeles service, as typically only one Chinese carrier can operate one international route in China.

In November 2014, the US and China relaxed new visa regulations, which increased Sino-US travel. However, an industry source told ATW that carriers on the routes are suffering from overcapacity, making it difficult turn a profit.

Because Hainan Airlines does not have a major hub compared to China’s big three, the Haikou-based carrier has adopted an international strategy of operating from China’s secondary cities to primary foreign cities and vice versa.

(Katie Cantle - ATWOnline News)
Posted by Michael Carter at 11:25 AM

Saw lots and lots of Chinese visitors at the Aria the week before Christmas. Always with a cigarette in their hands. I can't gamble because of all the smoke. No matter what fancy filters they say they have, my lungs don't adapt.