Widerøe orders up to 15 Embraer E2s 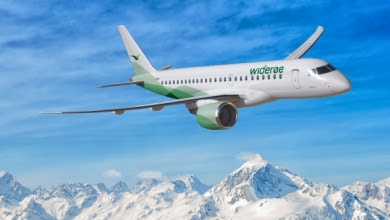 Scandinavian regional airline Widerøe has been named as the previously undisclosed customer for three firm Embraer E190-E2s in a deal valued at $873 million at list prices if purchase rights on a further 12 E2 family aircraft are firmed.

Announcing the order Jan. 16, Embraer said the three firm aircraft were included in its 2016 fourth quarter backlog, taking the E2 program to 275 firm orders, or 690 aircraft including letters of intent, options and purchase rights.

Norway-headquartered Widerøe, which operates an all-Bombardier turboprop fleet, signed the previously unannounced deal Dec. 23 and is a new customer for Embraer.

Embraer Commercial Aviation CCO Arjan Meijer said the order represented a “step change” in Widerøe’s operations because the E190-E2s will be the first jet additions to Widerøe’s all-turboprop fleet.

Widerøe CEO Stein Nilsen told ATW that the new generation of regional jets offers operating costs comparable to the Q400, making the shift from turboprops both viable and efficient.

“This has always been Widerøe’s strategy. We don’t have a big expansion plan. We build very slowly and focus on profitable growth,” Nilsen said. “The flexibility offered by Embraer’s family of same type-rated E2 aircraft will enable us to build a right sized fleet, as a supplement to our existing fleet, in accordance with market requirements.”

Nilsen told ATW that the Bombardier CS100 and Mitsubishi MRJ90 were also under consideration, but the flexibility of the three-aircraft E2 family ultimately won the order.

Meijer said this was the first time that the new regional jet products from Bombardier, Embraer and Mitsubishi had all properly gone head-to-head. “This was the first clear competition with the CSeries and MRJ and I am extremely content that the Embraer aircraft family concept proved its value here.”

The first three aircraft will be configured with 114 seats in a single-class layout and used to develop routes with heavier traffic flows.

Widerøe is the largest regional airline in Scandinavia, with 3,000 staff. It flies 3 million passengers annually, generating NOK4.4 billion ($516.5 million) in revenues, across a network which comprises 60% commercial and 40% public services obligation routes.

Did you know you can create short urls with LinkShrink and get dollars from every click on your shortened urls.