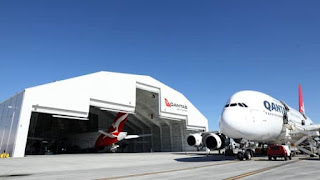 Qantas' new hangar at LAX is billed as the first in North America specifically designed to accommodate the giant Airbus A380. (Photo - Qantas)

If you needed to, you could fit it completely inside (either nose-in or tail-in, your choice) the $30 million hangar Qantas Airways, Australia’s largest airline, officially unveiled at a ribbon-cutting ceremony on Friday at Los Angeles International Airport.

The hangar, billed as the first in North America specifically designed to accommodate the giant Airbus A380 and one of the largest commercial hangars in North America, replaces one built back in 1958.

That’s helpful because there are currently more than 40 Qantas flights each week traveling between LAX and Sydney, Melbourne and Brisbane, Australia, on Airbus A380s and Boeing 747s, with Boeing 787-9 Dreamliner service planned to begin on the Melbourne-Los Angeles route in December 2017.

“We can have up to four aircraft on the ground at LAX at once and some are here for around 14 hours,” said Qantas Group CEO Alan Joyce at the unveiling. “So it makes sense to have a facility where we can make good use of that time by doing scheduled maintenance.”

Joyce added that while Australia will always be where the carrier does the majority of its maintenance, “LAX is our next biggest transit point so we’re pleased to now have a facility that reflects that.”

He said that in addition to doing work on its own planes, the size of the new hangar means the carrier can now bid for work on aircraft owned by other carriers at LAX and rent out space to airlines.

At 480 feet by 370 feet, the new hangar is large enough to allow four aircraft to be worked on simultaneously, Qantas boasts, and has a ceiling high enough for an A380 to be jacked up to make room for undercarriage changes.

In addition to a larger parts facility with vertical lifts that enable parts to be delivered to engineers quickly, the new building has skylights, electric vehicle charging stations and "mega doors" made from a translucent material that lets in natural light when the doors are rolled down.