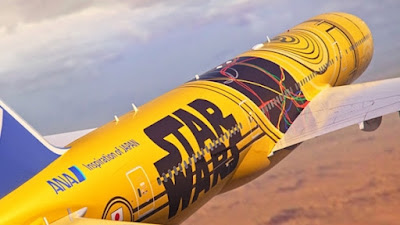 The aircraft, which will continue to fly on various Japanese domestic routes, is part of the continuing ANA Star Wars Project.

According to ANA, on the C-3PO ANA JET, “passengers will experience the world of Star Wars with specially designed C-3PO paper cups and headrest covers and cabin attendants will wear C-3PO aprons.”

The C-3PO ANA JET will join ANA’s fleet of existing planes that have Star Wars characters as livery: the R2-D2 ANA JET and BB-8ANA JET both are flying on international routes, while the new C-3PO ANA JET is assigned to Japan domestic routes.


(Linda Blachly - ATWOnline News)
Posted by Michael Carter at 11:08 AM