Once-soaring Mexican discount airline Interjet is now in a stall 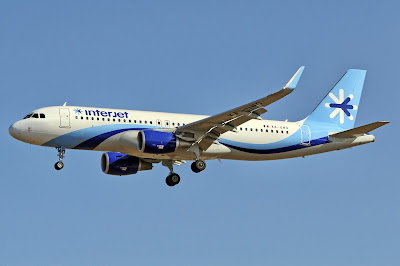 In cavernous jet hangars in and around Mexico City, Interjet has a secret.

Four of the Mexican airline’s Sukhoi Superjet 100s — out of a fleet of 22 — have been grounded for at least five months because of engine maintenance delays. The Russian-made aircraft, which average just 4 years old, are now being cannibalized, an industry term for when a plane is slowly scrapped for parts to keep other jets running.

A grounded plane is a wasted plane, and Interjet’s offline aircraft are symbolic of an airline that’s veered off course. Once one of Mexico’s hopefuls to bring a new era of competition to the industry, Interjet has muddled along with a questionable strategy while more nimble rivals have appeared on the scene. Now, the stranded Sukhoi Superjets are adding to concerns about whether ABC Aerolineas, the company’s formal name, will ever thrive.

“There are doubts about the viability of the business,” said Carlos Ozores, an air-transport specialist at ICF, a consulting and technology services company based in Virginia. “The only way for an airline to make money is to keep flying.”

Interjet confirmed the grounded aircraft but said it’s in good financial shape. The parked-plane situation can be traced back to a decision Chief Executive Officer Jose Luis Garza made half a decade ago when he agreed to buy the little-known and largely untested Sukhoi Superjets, which are backed by Italy’s Leonardo SpA and Russia’s Sukhoi. The engines are made by France’s Safran SA and a Russian partner.

JSC Sukhoi doesn’t have a single maintenance facility in the Americas. Airbus SE, which services the rest of Interjet’s fleet, operates three. That’s important because planes need regular and meticulous upkeep. It’s like driving a Hummer in a land of Volkswagens. For a time you’ll be fine, but once the vehicle requires so much as a tune-up, finding the parts and the labor to fix it will be tricky and costly.

“The supply chain with this aircraft has been a process,” Garza said from his office overlooking the Mexico City airport. “But we’re getting to where we want to be with them.” To ease maintenance problems, a $7-million consignment stock is being set up this year with Sukhoi parts, he said.

“The decision to buy them was a technical and economical one,” he said, calling the deal an “extraordinary acquisition agreement” the company wouldn’t have gotten from Brazilian maker Embraer SA.

Interjet made a splash as Mexico’s first airline for the budget-conscious flier when it was founded in 2005 by the Aleman family, the son and grandson of a former Mexico president. The company’s regional focus and deeply discounted ticket prices quickly turned it into the No. 2 airline by passengers as of 2011. But in the years that followed, the carrier hit turbulent skies, causing the company’s overall market share to stagnate while ultra-low-cost rival Controladora Vuela Compania de Aviacion, known as Volaris, has seen its stake soar.

“It’ll be hard for it to survive without a change of strategy,” Ozores said. “It’s hard operating in the middle.”

The middle that Ozores is referring to is the point between being a low-cost carrier and a full-service one. Interjet’s original economic model has slowly morphed into a sort of hybrid, so that these days, the carrier is trying to compete on price and service — and falling short on both fronts.

Garza says Interjet has focused its growth strategy on international routes since 2014, almost doubling its share of foreign flights to and from Mexico to about 21% as of November, from 11% in 2014. The airline began flying to John Wayne Airport in Orange County in 2012, but dropped the service two years later. It began serving Los Angeles International Airport in 2016.

While that expansion has helped boost the company’s dollar income — a boon for companies battered by a local currency that’s lost a third of its value in five years — Interjet has paid a heavy price to compete with its bigger rivals.

Interjet freebies such as snacks and checked luggage put its costs on par with full-service rivals such as Grupo Aeromexico SAB. It also boasts of comfortable leg room, adapting the seating configuration on its Airbus aircraft so that its planes fly an average 13% below capacity. Despite those perks, Interjet’s image is still solidly stuck in the domain of budget carriers. However, its prices are sometimes more than double those of Volaris, which started operations in 2006.

“We’re told we’re leaving money on the table,” Garza said. “Does that mean we should overbook flights and start charging for everything? We don’t think so.”

It’s for that reason that keeping a constant eye on costs is so crucial. For low-cost carriers, that usually means limiting fleets to a single aircraft to save on maintenance-training costs. But Interjet’s 22 Superjet 100 planes coexist with its 50 Airbus A320 jetliners as well as six Airbus A321 aircraft.

“The most important defining characteristic of a low-cost carrier is an airline that’s able to keep costs low, whatever way they manage to do it,” said Triant Flouris, an International Air Transport Assn. flight instructor and academic at the Hellenic American University in Greece.

It was about a year ago that Garza’s decision to bet on the Sukhoi Superjet first came back to haunt him in a big way. In December 2016 — peak travel season for holiday fliers — the Russian aviation authority warned of a defect in a part that helps the aircraft fly straight in the air. After Interjet inspected its own planes, it grounded half its Sukhoi Superjet fleet and was forced to cancel 25 flights, Garza said at the time.

Although the planes were back in service by the following month, the damage was done. Some consumers began a social media campaign to pressure Mexico’s consumer watchdog to ban Interjet from flying the planes ever again, although nothing came of the requests.

“The Superjet hasn’t become very popular outside of Russia,” Flouris said. “Most of the airlines that I’ve seen flying this jet are closer to Russia.”

The 2012 Sukhoi Superjet purchase was the best choice for Interjet given Mexico City’s temperatures, altitudes and the routes they were intended to cover, Garza said. It was a bold bet on Russia’s first major passenger aircraft since the collapse of the Soviet Union. The single-aisle aircraft sold for about a half of the price of comparable jets from Brazil’s Embraer or Canada’s Bombardier Inc.

JSC Sukhoi did not respond to requests for comment.

Interjet has some financial challenges to overcome in the meantime. Financial reports show maintenance costs are rising faster than other expenses, and they now top what Aeromexico pays to keep its planes running, Duff said. Aircraft-leasing firms have boosted deposit requirements for the airline, Bloomberg Intelligence analyst George Ferguson said, adding that “lessors are probably paying close attention to their operations.” Out of its 78-aircraft fleet, the company owns 30 and leases the rest.

A cash injection of 3.2 billion pesos put forth by the Aleman family last year helped the company pay down most of its short-term liabilities. “We paid down short-term debt because that’s what had analysts worried,” Garza said.

Mexico’s government has reason to be worried. The nation took a major blow when Mexicana de Aviacion SA filed for bankruptcy and ceased operations in 2010. Mexicana’s chairman was charged with embezzlement (the charges were later dropped), and hundreds of pilots and flight attendants saw large chunks of their pension funds shrink. Mexico’s aviation market, meanwhile, lost one of its biggest players, opening the void that Interjet, Volaris and Aeromexico would ultimately fill.

(Andrea Navarro - Bloomberg)
Posted by Michael Carter at 11:53 AM