A Norwegian Air flight had to turn around shortly after takeoff due to an issue with the toilets — despite there being 85 plumbers on board.

The Saturday flight from Oslo to Munich was already running behind schedule after departing 34 minutes late, but didn’t make it past the Swedish border after experiencing a problem with the lavatory, Norwegian newspaper Dagablat reports. 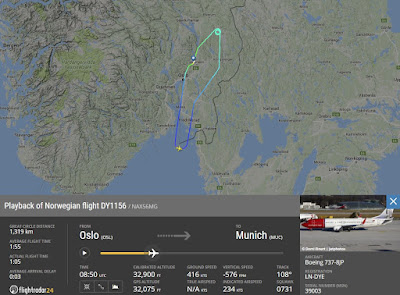 "It is true that DY1156, who was to fly from Oslo to Munich, had to turn to Oslo again when they found a mistake on the toilets on board. The plane had to circulate over Hedmark to get rid of fuel so it was not too heavy to land,” communications advisor Fatima Elkadi told Dagbladet.

On the 186-seat plane, 60-70 of the passengers were plumbers from the same company with more from the industry on board, as well. They were reportedly "on their way out for a trip to Munich with their plumbing company," according to The Nordic Page.

"We would have liked to fix the restrooms, but unfortunately it had to be done from the outside and we did not take the opportunity to send a plumber [out] at 10,000 meters,” the CEO of the plumbing company, Frank Olsen, told the paper.

A spokesperson for the airline told Travel and Leisure that the aircraft was repaired and continued on a flight later the same day.