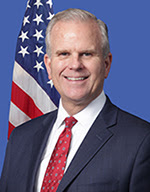 US President Donald Trump has not yet nominated the next FAA administrator. It is uncertain whether Elwell could be a candidate. He does have one qualification Trump has indicated he wants at the top spot at FAA: Elwell is a former pilot. A graduate of the US Air Force Academy, Elwell flew Boeing 757s, 767s, DC-10s and MD-80s over a 16-year commercial pilot career with American Airlines.

Trump expressed dismay that Huerta was not a pilot and said it would be “better to have a pilot” leading FAA. Huerta was nominated to the post by former US President Barack Obama.

Huerta is widely credited within the air transport industry for gaining some traction in FAA’s NextGen ATC program and for a strong focus on safety, particularly his effort to make FAA more predictive than reactive regarding safety.

The initiative to transition US ATC to a satellite-based system did make progress in several areas under Huerta, including the installation of Data Comm—enabling voiceless communication between pilots and controllers—at airports across the US. However, US air traffic controllers continue to use paper flight strips and airlines have complained NextGen has moved too slowly overall. Huerta was generally reluctant to wade into the debate over whether ATC should be split off from FAA, which proponents believe would speed up air traffic management modernization.

There were no fatal crashes involving US passenger airlines during Huerta’s five-year tenure and the administrator placed a heavy emphasis on reforming FAA’s safety oversight. Huerta championed an FAA rule requiring all US commercial airlines to establish a safety management system (SMS), which uses data analysis to identify safety risks, by 2018. He believed FAA was better off moving away from a punitive approach to safety.

“We don’t want operators who might inadvertently make a mistake to hide it because they have a fear of being punished,” Huerta explained. “If there is a failing, whether human or mechanical, we need to know about it, to learn from it and make the changes necessary to prevent it from happening again.”

Elwell takes over FAA on an acting basis as the agency faces a March 31 deadline to be reauthorized. Huerta repeatedly expressed frustration at the inconsistency with which FAA is funded by Congress, which has regularly passed temporary extensions rather than a full reauthorization. FAA is currently operating under a temporary extension.

“Dan’s background as a military and commercial pilot and past leadership positions in FAA and the aviation sector ensures a seamless transition to continue the important mission of the FAA,” US transportation secretary Elaine Chao said.

Elwell was FAA assistant administrator for policy, planning and environment from 2006 to 2008. He was Aerospace Industries Association (AIA) VP-civil aviation from 2008 to 2013 and Airlines for America (A4A) SVP-safety, security and operations from 2013 to 2015.