F-14 Tomcat: The Navy Fighter It Wishes It Could Bring Back from the Dead 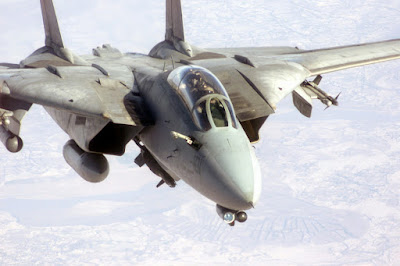 The Navy’s F/A-XX program could be used to fill the service’s air superiority gap—which has essentially been left open since the F-14’s retirement and the demise of the NATF and A/F-X programs. But the problem is that the Navy is pursuing the F/A-XX as a multirole Super Hornet replacement rather than an air superiority-oriented machine. “The danger in its development is that it suboptimizes the fighter role in the quest for a hybrid fighter/attack jet,” the Hudson Institute report notes. “This would leave the Joint Force without a carrier-based sixth generation air superiority fighter.”

While the requirement for a carrier-based long-range strike capability is a frequent subject of discussion around Washington, the U.S. Navy’s need for improved air superiority capabilities is often neglected.

The service has not had a dedicated air-to-air combat aircraft since it retired the Grumman F-14 Tomcat in 2006. But even the Tomcat was adapted into a strike aircraft during its last years in service after the Soviet threat evaporated. Now, as new threats to the carrier emerge and adversaries start to field new fighters that can challenge the Boeing F/A-18E/F Super Hornet and Lockheed Martin F-35C Joint Strike Fighter (JSF), attention is starting to shift back to this oft-neglected Navy mission—especially in the Western Pacific.

“Another type of new aircraft required is an air superiority fighter,” states a recent Hudson Institute report titled Sharpening the Spear: The Carrier, the Joint Force, and High-End Conflict, which is written by The National Interest contributors Seth Cropsey, Bryan McGrath and Timothy A. Walton. “Given the projection of the Joint Force’s increased demand for carrier-based fighter support, this capability is critical.”

The report notes that both the Super Hornet and the F-35C are severely challenged by new enemy fifth-generation fighter aircraft such as the Russian-built Sukhoi T-50 PAK-FA and Chengdu J-20. Indeed, certain current adversary aircraft like the Russian Su-30SM, Su-35S and the Chinese J-11D and J-15 pose a serious threat to the Super Hornet fleet. It’s a view that shared by many industry officials, U.S. Navy, U.S. Air Force and even U.S. Marine Corps aviators. “Both F/A-18E/Fs and F-35Cs will face significant deficiencies against supercruising, long-range, high-altitude, stealthy, large missile capacity adversary aircraft, such as the T-50, J-20, and follow-on aircraft,” the authors note. “These aircraft will be capable of effectively engaging current and projected U.S. carrier aircraft and penetrating defenses to engage high value units, such as AEW aircraft, ASW aircraft, and tankers. Already, the F/A-18E/F faces a severe speed disadvantage against Chinese J-11 aircraft, which can fire longer range missiles at a higher kinematic advantage outside of the range of U.S. AIM-120 missiles.”

Nor does the F-35C—which suffers from severely reduced acceleration compared to even the less than stellar performance of other JSF variants—help matters. “Similarly, the F-35C is optimized as an attack fighter, resulting in a medium-altitude flight profile, and its current ability to only carry two AIM- 120 missiles internally [until Block 3] limits its capability under complex electromagnetic conditions,” the authors wrote. “As an interim measure, the Navy and Air Force should significantly accelerate the F-35C’s Block 5 upgrade to enable the aircraft to carry six AIM-120 missiles internally.”

The F-35C was never designed to be an air superiority fighter. Indeed, naval planners in the mid-1990s wanted the JSF to be a strike-oriented aircraft with only a 6.5G airframe load limit with very limited air-to-air capability, according to one retired U.S. Navy official. Indeed, some naval planners at the time had discussed retiring the F-14 in favor of keeping the Grumman A-6 Intruder in service. During this period, many officials believed air combat to be a relic of the past in the post-Cold War era. They anticipated most future conflicts to be air-to-ground oriented in those years immediately following the Soviet collapse. Together with a lack of funding, that’s probably why the Navy never proceeded with its Naval Advanced Tactical Fighter (NATF) or A/F-X follow-on program.

The Navy’s F/A-XX program could be used to fill the service’s air superiority gap—which has essentially been left open since the F-14’s retirement and the demise of the NATF and A/F-X programs. But the problem is that the Navy is pursuing the F/A-XX as a multirole Super Hornet replacement rather than an air superiority-oriented machine. “The danger in its development is that it suboptimizes the fighter role in the quest for a hybrid fighter/attack jet,” the Hudson Institute report notes. “This would leave the Joint Force without a carrier-based sixth generation air superiority fighter.”

As the Navy’s current director of air warfare, Rear Adm. Mike Manazir, has stated in the past, the authors also note that such “an aircraft could feature large passive and active sensor arrays, relatively high cruising speed (albeit not necessarily acceleration), could hold a large internal weapons bay capable of launching numerous missiles, and could have space to adopt future technologies, such as HPM [high-powered microwaves] and lasers. This air superiority asset would contribute to Outer Air Battle integrated air and missile defense requirements and would be capable of countering enemy weapons, aircraft, and sensor and targeting nodes at a distance.”

Outer Air Battle, of course, refers to a Navy concept from the 1980s to fend off a concerted attack by hordes of Soviet Tupolev Tu-22M Backfire bombers, Oscar-class (Project 949A Antey) nuclear-powered guided missile submarines and surface action groups lead by warships like the Kirov-class nuclear-powered battlecruisers—as now deputy defense secretary Bob Work [he was the CEO of the Center for a New American Security at the time] described to me in 2013. These Soviet assets would have launched their arsenals of anti-ship cruise missiles from multiple points of the compass.

As Work described it, the Navy was relatively confident it could sink the Oscars and surface ships before they could launch their missiles. They were far less confident about their ability to take out the Tu-22Ms before they could get into launch position. The Tomcats, under Outer Air Battle, would try to “kill the archers”—the Backfires—before they could shoot and attempt to eliminate any cruise missiles that they launched. But, Work notes, no one knows how well it would have worked during a shooting war with the Soviet Union—and it’s a good thing we never got to find out. But with China’s emerging anti-access/area denial strategy, the threat is back.

While the F/A-XX and the Air Force’s F-X are in their infancy, it has become clear that they will be different aircraft designs that will probably share common technologies. The Navy does seem to be focusing on a more defensive F-14 like concept while the Air Force is looking for a more offensively oriented air superiority platform that could replace the Lockheed Martin F-22 Raptor. “As you'll see over the coming years, the differences between the primary mission and the likely threats will drive significant differences between the F/A-XX and F-X programs as well as legacy systems like the F-22 and F-35,” one senior defense official told me.


(Dave Majumdar - The National Interest)
Posted by Michael Carter at 10:48 AM