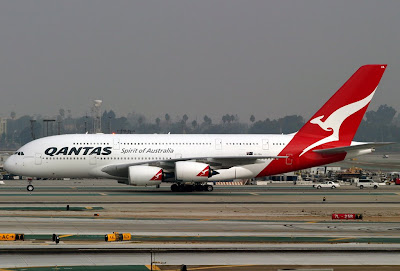 Qantas A380-841 VH-OQA (cn 014) "Nancy Bird Walton"
taxies at LAX. (Photo by Michael Carter)
Qantas's A380 flights into Los Angeles International are going well, Los Angeles World Airports Executive Director Gina Marie Lindsay said yesterday in Washington. "We can handle the A380 now," she told the International Aviation Club. However, LAX has made certain adjustments owing to the size of the aircraft: "We do basically shut down [other] operations to have a takeoff or landing of the A380," she said, adding that each arriving and departing A380 flight also receives a ground escort to and from the gate.
Commenting on LAWA's massive capital investment program at LAX, Lindsay, who took over in 2007, said the program "is necessary even if we don't get one more passenger because the place is falling apart," a victim of "decades of historical inaction," encompassing "constant planning, no maintenance and no facilities projects." A $2 billion upgrade of the international terminal was announced earlier this week.
(Air Transport World / ATWOline)
Posted by Michael Carter at 9:28 AM