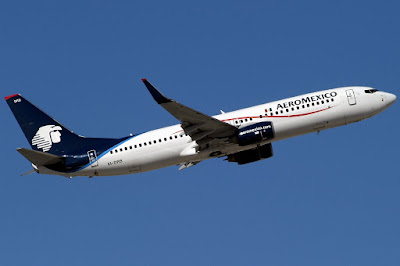 Aeromexico 737-852 EI-DRB (35115/2070) departs Las Vegas (LAS) on a lovely afternoon. (Photo by Michael Carter)
US FAA issued an emergency airworthiness directive late Tuesday requiring inspection of all 737NG center wing tank fuel pump autoshutoff wiring systems within 48 hr., warning that "incorrect wiring" could lead to "localized overheating of parts inside the fuel pump [that] could produce an ignition source inside the fuel tank."


The agency said it received a report of "failure of the left-hand fuel pump of the center wing tank to shut off after being selected 'off' by the flightcrew during flight" on a 737-700 and subsequently the failure was found on two additional 737NGs.


According to the AD, "Information indicates that the autoshutoff system appears to function normally; however, when the flightcrew manually turns off the CWT pump switches, that action turns off the right-hand pump, but re-energizes the left-hand pump due to incorrect wiring. The low-pressure lights turn off, incorrectly indicating. . .that power to both pumps has been removed." Consequently, pilots could be unaware that the left-hand fuel pump is still running, potentially causing overheating and ignition.


FAA is requiring airlines that operate 737NGs that have the autoshutoff system for center wing fuel pumps to verify that "the wiring is correctly installed" as well as to conduct a "functional test of the autoshutoff system." Carriers are required to take applicable corrective actions and to report both positive and negative findings to Boeing.


The agency noted that the left-hand fuel pump of the CWT "may be deactivated" for up to 10 days if the required tests cannot be conducted within 48 hr.


"The inspection report that is required by this AD will enable the manufacturer to obtain better insight into the nature, cause and extent of the failure. . .and eventually to develop final action to address the unsafe condition," FAA said, adding that it may issue a further rulemaking as more information becomes available.


(Air Transport World / ATWOnline)
Posted by Michael Carter at 9:40 AM

Nice Blog.,I would like to get updates from you. Keep blogging.
List of Logistics Companies in Bangalore | Freight Forwarding Companies in Chennai | Logistics Service Provider Bangalore