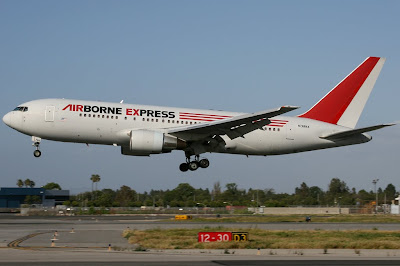 Airborne Express (ABX Air) 767-281(PC) (22786/54) arrives in Long Beach on a lovely afternoon. The carrier which has operated into LGB for years originally using Douglas DC-8-63's may disappear from the skies above Long Beach as soon as late January 2009.
(Photo by Michael Carter)
ABX Air, which handles packages for DHL Express in the United States, faces 6,000 or so layoffs and an uncertain financial future after the German shipping company decided it would pull out of the domestic US market.
The DHL contract generates almost three-quarters of sales for parent company Air Transport Services Group, worth about USD$280 million in the second quarter.
Deutsche Post's decision on Monday to pull its DHL Express unit means that ABX Air will likely have to lay off most of its 7,000 or so employees."A substantial majority of our employees dedicated to DHL's domestic package network will not be required by DHL after January 2009," the company said in a statement on Monday.
ABX Air may yet handle DHL's international business in the United States, a spokesman for Air Transport Services said, but that would depend on whether DHL agrees on a plan to use rival United Parcel Service to handle its US packages instead.
ABX Air and Air Transport Services are still assessing the impact of DHL's move on their business, the spokesman added, and will likely release their delayed quarterly financial report later this week.
(Reuters)
Posted by Michael Carter at 8:44 PM

Nice Post.,I really enjoyed reading it, you are a brilliant writer.I actually added your blog to my favorites and will look forward for more updates.
List of Logistics Companies in Bangalore | Freight Forwarding Companies in Chennai | Logistics Service Provider Bangalore