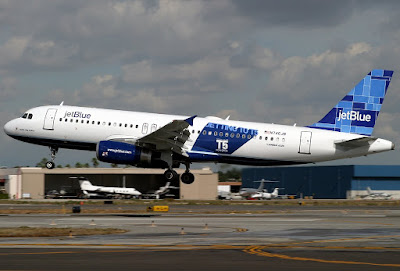 jetBlue A320-232 N746JB (cn 3622) "Some Like It Blue" is the first aircraft to sport the special "Terminal 5" commemorative livery arrives in Long Beach.
(Photo by Michael Carter)
Terminal 5 (T5) officially opened at John F. Kennedy Airport (JFK) on October 22. T5 was once the home of Trans World Airlines (TWA) and is famous for it's unique design. jetBlue will now call T5 home and has painted the first of 5 aircraft with commemorative markings.
Posted by Michael Carter at 7:05 PM

Through your blog, a lot of people including me of course have a chance to read and learn from.
Meet me at
http://gwb-chinese.blogspot.com/
Thanks again and looking forward for more of your posting soon!

Nice Post.,I really enjoyed reading it, you are a brilliant writer.I actually added your blog to my favorites and will look forward for more updates.
List of Logistics Companies in Bangalore | Freight Forwarding Companies in Chennai | Logistics Service Provider Bangalore