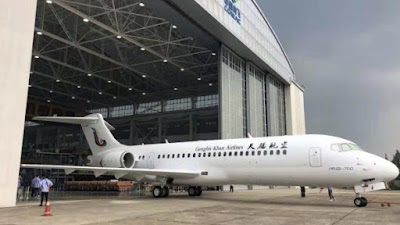 ARJ21 being prepared for delivery to Genghis Khan Airlines.
(COMAC)

The first ARJ21 delivery is scheduled for the end of 2018, COMAC said, confirming an Aug. 21 ATW report.

In August, an industry source said the company had already placed the order, but the formal signing ceremony was held Oct. 15.

COMAC did not specify the quantity in its latest announcement, but Genghis Khan Airlines said it plans to have 25 ARJ21s in five years.

The new carrier is owned by companies of the central and Inner Mongolian provincial government. It will be based at Hohhot, the capital of Inner Mongolia.

Genghis Khan Airlines will be the second operator of the ARJ21 and the first that is independent of COMAC. Lead ARJ21 operator Chengdu Airlines is a subsidiary of the manufacturer.