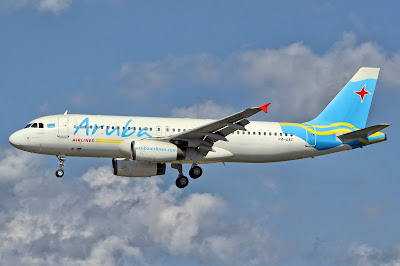 Originally delivered to Air Macau as CS-MAD on February 27, 1996 she served with the carrier until being leased to Ryan International Airlines as N573DC on February 12, 1999.

Sichuan continued operating the aircraft until returning it to International Lease Fiance Corporation (ILFC) on February 20, 2013.

On July 19, 2013 Aruba Airlines put the aircraft into service and operated it until it was withdrawn from use (WFU) on February 28, 2017 just 20 days after the above photo was taken. The aircraft was then stored at Phoenix-Goodyear Litchfield Municiple Airport (GYR/KGYR) on March 11, 2017 and later scrapped in October 2017.
Posted by Michael Carter at 1:33 PM