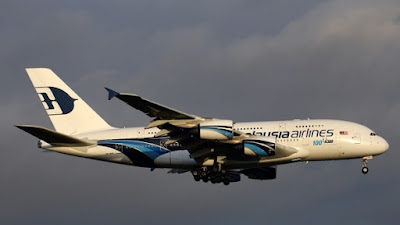 New CEO Peter Bellew detailed the A380 plans Nov. 18 during a panel discussion in Manila at the Association of Asia Pacific Airlines (AAPA) 60th Assembly of Presidents. He said the A380s were “too big and thirsty” for the carrier’s Kuala Lumpur-London Heathrow route and it was “too early yet for a second-hand sales market” for the super jumbo.

Consequently, Malaysia has decided to create a separate carrier unit specializing in Hajj transport. The aircraft will be reconfigured with 650-700 seats to give “very competitive seat costs,” Bellew said.

Ultimately, Bellew added, he believed there would be a “great opportunity for second-hand A380s, not just the aircraft we have.” He said he thought of the A380 as more like a spaceship than an aircraft and said that when they began looking deep inside Malaysia Airlines’ aircraft during C-check maintenance, he realized they were “put together in the most incredibly strong way and were showing no wear and tear. I think they will be like the Boeing 707 and still be flying in 40 or 50 years’ time,” he said.

Speaking earlier on the sidelines of the Assembly, Airbus COO customers John Leahy said he saw two different markets developing for the A380—new and used. “My argument is that there are certain markets that will want new and some that will want used. Some of [Emirates Airline president] Tim Clark’s used A380s create big marketing opportunities and I think you will see the market expanding into new operators,” Leahy said.

Leahy retains his faith in the future of the A380, despite Airbus having decided this year to cut the production rate from 2.5 to one aircraft per month in 2018. But Leahy said he believed a re-engined neo version ultimately would be built, pointing out that people “go out of their way to get on the airplane.”


(Karen Walker - ATWOnline News)
Posted by Michael Carter at 11:32 AM