For China’s twin-aisle dream jet, runway stretches out to the horizon 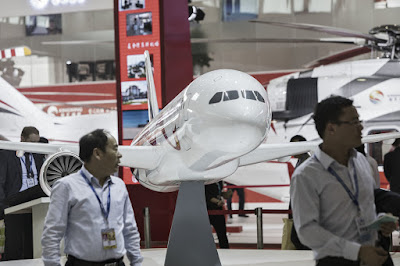 China’s state-owned aircraft manufacturer is setting its sights on developing a long-haul plane to take on Airbus’ A350 and Boeing’s 787, but it has a long way to go.

Fresh from firming up the first orders for its short-haul C919 at last week’s Zhuhai Air Show, China’s state-owned aircraft manufacturer is setting its sights on a more glittering horizon: a twin-aisle, long-haul plane to take on the Airbus A350 and Boeing’s 787.

There’s a problem with horizons, though: The closer you get, the more they seem to recede. That’s certainly the case in the commercial-aerospace market, where products can take decades to develop and decades more to sell.

The proposed aircraft will carry 280 people for7,500 miles and begin deliveries in about 10 years, according to Commercial Aircraft Corp. of China, or Comac, which plans to develop the planes alongside Russia’s United Aircraft Corp.

China has two major advantages in developing an indigenous commercial-aerospace industry, and two big drawbacks. Its domestic aviation market is growing fast and will be the world’s biggest by 2035. In addition, the dominance of airlines owned by the same state agencies that control Comac means a local manufacturer is well placed to twist arms with potential buyers.

The problem is technology.

Commercial aircraft, and the engines that power them, are some of the most complex objects ever manufactured.

Airbus and Boeing are already wearing themselves out trying to keep up with each other’s advances into new materials technologies.

Both the 787 Dreamliner and the A350 XWB are made up of about 50 percent composite materials such as carbon fiber.

Life for challengers to the big two is even harder. Canada’s Bombardier planned to demolish the short-haul duopoly of Boeing’s 737 and Airbus’ A320 when it started developing its C Series jet in 2004. More than a decade on and with only a tiny slice of the market, the program drove Bombardier to seek a $1 billion bailout from Quebec’s provincial government this year.

While the C919 has been plagued by delays and is already almost three years behind on its first test flight, it’s probably not the aircraft to bet against. As long as Comac can make the thing fly, it can hope for an almost guaranteed market within China — enough on its own to deal a severe blow to Airbus and Boeing.

The proposed twin-aisle jet is a trickier proposition. To sell a plane overseas, Comac will have to convince aviation regulators in other countries that its planes are safe to fly over major cities, then persuade foreign airlines to order them.

Purchasing a new model of plane isn’t as simple as buying a new car: Pilots and engineers must be retrained and maintenance supply chains set up, so airlines will want to see a strong track record before taking the plunge.

Airbus was around for 17 years before it won its first order from a major U.S. airline. It didn’t win a deal with a major Japanese carrier until 2013.

Given all that, and the fact that aircraft manufacturers aren’t very profitable anyway, you’d be tempted to wonder why Comac would bother if it wasn’t for national pride. It took Airbus three decades to become a serious challenger to Boeing. There will probably be a similarly long runway before Comac’s ambitions get airborne.