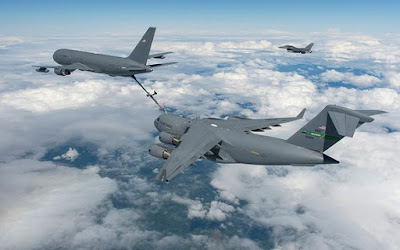 
America's defense contractors have a lot of customers, and in a lot of different countries. One of the most important of these is Japan.

I know that in theory, Japan's "military" is "only" a self-defense force, but it's a big one. With an annual defense budget measured in the tens of billions, Japan has ranked as the world's 16th-largest weapons importer over the past 15 years. What's more, last year, Japan "reinterpreted" Article 9 of its Constitution to permit various forms of cooperation with military allies -- and in ways formerly verboten to the Self-Defense Forces.

Already, the effects of that reinterpretation are making themselves felt. And pretty soon, they should become visible on Boeing's bottom line.
Extending Japan's wings

Last month, in one of its regular "notifications" to Congress, the U.S. Defense Security Cooperation Agency (DSCA) announced that the Government of Japan has requested permission to buy four KC-46A "Pegasus" aerial refueling aircraft from Boeing.

According to DSCA, selling these tankers to Japan will not "affect the basic military balance in the region." It will, however, improve "Japan's capability to participate in Pacific region security operations," improve "Japan's national security posture," and "provide Japan a needed capability to a close ally and support U.S. security interests in the region" -- as is now permitted by the reinterpretation of Japan's Constitution Article 9.

Including electronics equipment from Raytheon, missile defense accoutrements from Northrop Grumman, and engines from United Technologies, the total value of the contract is expected to be $1.9 billion -- with Boeing acting as prime contractor.


So what does this mean for Boeing and its shareholders? The size of the proposed Japan contract is impressive in and of itself. But perhaps even more important than the dollar value is the vote of confidence Japan has given Boeing.

Remember, the U.S. Air Force itself only OK'd the KC-46 for low-rate initial production (LRIP) a couple of months ago. And just weeks after that happened, Japan placed an order to buy some. Clearly, Japan is champing at the bit to buy this plane -- and where Japan leads, the hope is that other buyers will follow.

This is a rare bit of good news for Boeing's KC-46A program, which has been kind of a disaster up until now. Boeing bid low to win a contract to build it for the Air Force, then was forced to eat more than $1 billion in cost overruns on the airplane's development. At this point, for Boeing to have even a chance of breaking even, it needs to sell more Pegasi than the Air Force is prepared to buy -- so as to spread out development costs among as many plane sales as possible.

Japan's purchase suggests this may be a viable path forward for Boeing.
Should you buy Boeing stock?

Before buying Boeing stock, you'll want to take a closer look at the company as a whole. So let's do that:


How does a value investor use numbers like these to determine if a stock like Boeing is worth buying? Start by adding the company's projected growth rate to its dividend yield. These two numbers combined give you the "total return" you're expecting on an investment in Boeing: 15.8%.

Moreover, I can't help noticing that Boeing's price-to-sales ratio, which I've found especially useful for finding bargain stocks in the aerospace and defense industry, is currently clocking in well below the 1.0-times-sales rule of thumb for fair value.

The upshot for investors

In my book, I'm scoring Boeing at "two out of three ain't bad" on these valuation metrics. Boeing's GAAP-derived P/E ratio looks a bit high -- due, in part, to all the writedowns that Boeing has been forced to take on the KC-46 project. But its low P/FCF and P/S ratios, combined with a respectable growth rate and strong dividend yield, tell me that investors are underestimating the value in Boeing stock today.