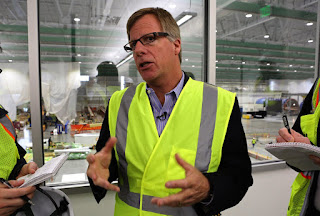 Eric Lindblad, seen here giving a tour of Boeing’s massive new 777X composite wing center in May, will step up to head the new jet program in January.
(Ken Lambert - The Seattle Times)

The head of Boeing’s 777X program, Bob Feldmann, will retire in January and will be succeeded by his deputy, Eric Lindblad.

Boeing announced internally Friday that 777X vice president and general manager Bob Feldmann will retire in January and will be succeeded by his deputy, Eric Lindblad.

Lindblad, 55, will be responsible for taking the new widebody jet through its final development phase and entry into service with airlines in 2020.

A 31-year Boeing veteran, Lindblad headed creation of the 777X wing center in Everett, the centerpiece of the the new airplane program. Before that, he was vice president of manufacturing operations for the highly successful 737 program in Renton.

Feldmann, 62, started his career in 1976 as an engineer with McDonnell Douglas working on the F/A-18 fighter. He later led development of the Navy’s EA-18G Growler and then moved to Renton to lead the P-8 Poseidon anti-sub aircraft program.

In 2011, Feldmann moved to the commercial airplane side, where he was general manager of the new 737 MAX before his appointment in 2013 to lead the 777X program.