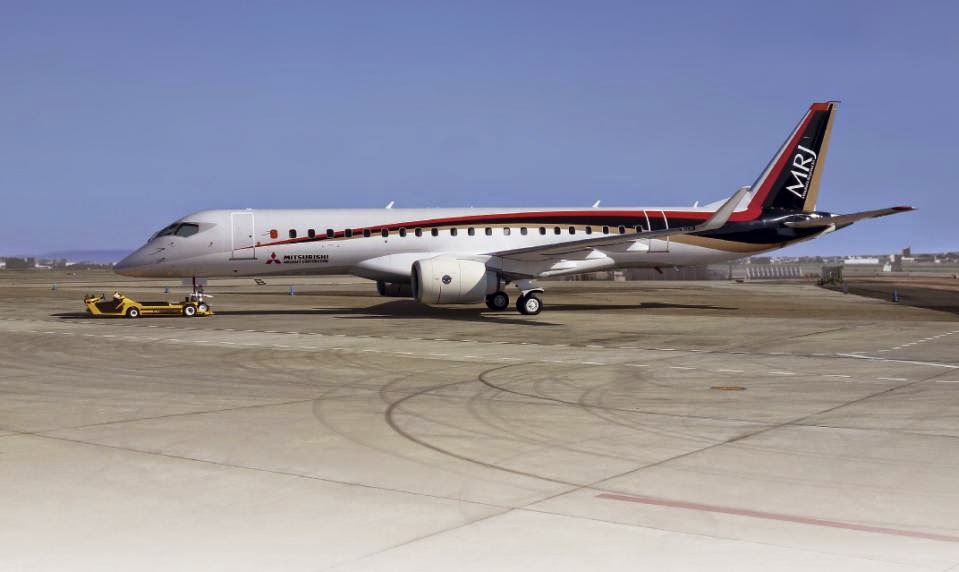 At a tightly guarded factory in central Japan, Mitsubishi, a maker of the Zero fighter planes of World War II, is launching its MRJ regional jet and aiming to fulfill Japan's long-cherished ambitions to regain status as a major aviation power.

The company said Friday that a recent decision to push back the jet's maiden flight from this spring to a few months later would not delay its commercial deliveries. Workers were conducting hydraulic and other tests on two of the test jets in a cavernous assembly facility; another jet had been sent out for painting.

Nobuo Kishi, a vice president of Mitsubishi Aircraft Corp., said the latest delay could speed things along because it is intended to allow for modifications that otherwise would be needed later.

"We don't see the change in the test flight as a delay, but as an improvement," Kishi told visiting reporters. "We want to continue the test flights without interrupting them for modifications."

Still, company executives are emphatic about their determination and urgency to get the job done.

"This is the last chance to get into real aircraft manufacturing. Mitsubishi Heavy Industries has a long-term vision to get into the aircraft assembly industry," Hideyuki Kamiya, head of marketing for Mitsubishi Aircraft Corp. said in an earlier briefing.

"We think we have a lot of potential to give this industry. This is very high tech work requiring skilled workers and engineers. We can compete in this area," he said.

The quest reflects a yearning to translate Japan's engineering and manufacturing prowess into a first-tier aircraft industry with global reach, an ambition subsumed for decades after Japan's 1945 defeat.

The plan dovetails with a national blueprint for turning the area near Nagoya into an aerospace hub on par with Boeing's manufacturing base near Seattle, Washington.

It also fits Prime Minister Shinzo Abe's vision for restoring the country's manufacturing tradition of "monozukuri," or "making things," that roughly translates into the craft of making excellent products through continuous improvement.

Developed partly with government support, the 70- to 90-seat jet project also parlays previous work by Mitsubishi on the Boeing 787 Dreamliner.

But years of delays are adding to the challenge of competing with Brazil's Embraer, which dominates the difficult regional jet market, making the project a risky one.

Mitsubishi executives stress that their product is 20 percent more fuel efficient than other leading single-aisle jets, because it was engineered specifically to work with a Pratt and Whitney high-bypass geared turbofan engine.

Such engines are more efficient because they require less jet thrust to propel them through the air. It will be quieter and slightly roomier than competitors' aircraft, they say.

The Mitsubishi regional jet is the successor to a failed attempt in the 1960s to break into the international commercial market with the 64-seat turboprop YS-11. The aim this time is finally to win Japan a foothold in the lucrative commercial passenger jet market.

After Japan's defeat, the U.S. occupation initially banned aircraft making. It was revived in the 1950s.

The aviation industry is a key supplier of components for passenger jets, most significantly the Boeing 787 Dreamliner, but mainly makes military aircraft for Japan's own defense force.

While it holds leading technologies in avionics, materials and other key aircraft-related know-how and products, Japan has yet to integrate them into an entire commercialized passenger aircraft.

"The real prestige in all this comes from being the systems integrator," Waldron said.  "You design the aircraft and then you integrate it, which is where the value really comes in, and then can sell that abroad. It's like a symbol of your country's prowess."

Airbus estimates demand for new passenger and cargo aircraft in 2014-2033 at 31,350, worth nearly $4.6 trillion. Mitsubishi says it hopes to win 20 percent of the global market for single-aisle passenger jets.

The company has 223 firm orders and 184 options, close to the scale that might enable it to begin recouping the 180 billion yen ($1.5 billion) it has spent developing the jet, based on the experience of other projects. SkyWest Inc. has made firm orders for 100 and took 100 as options, in a big boost for the project.

But delays in testing mean the jet's maiden flight has been pushed back to the July-September quarter from the current quarter. Mitsubishi says it will stick to its schedule for delivery to leading customer All Nippon Airways in the spring of 2017.

That may not allow enough lead time to make a dent in the overwhelming dominance of Embraer, which reports 1,549 firm orders and 772 options for its E-jet.

Earlier, the project suffered delays due to difficulties in getting deliveries of the hundreds of thousands of aircraft parts, about 70 percent of which are sourced from overseas.

Although the jet is "made in Japan" that refers only to its final assembly. Apart from the wings and other structural materials that are made by Mitsubishi Heavy Industries, and the landing gear, which is made by Sumitomo Precision Products, from the avionics in the cockpit to the galleys in the back, the plane mostly is built from foreign parts and equipment.


It's not that Japanese companies lack the capacity: Mitsubishi and other major Japanese companies make about 35 percent of the Boeing 787 "Dreamliner," providing the titanium alloy used for the body of the aircraft, carbon fiber composite material for its outer surface, wings, engines, tires, kitchen, audio visual system, batteries and wiring. But the aircraft industry is among the most globalized.


Japan has invested heavily in nurturing Nagoya as an aerospace hub. Home also to Toyota Motor Corp. and much of the auto parts supply chain, the region is a stronghold despite the shift of much Japanese manufacturing overseas.


The region provides more than two-thirds of the output value for airframe parts and has a GDP ranking 20th in the world, behind Switzerland but ahead of Belgium.


(Elaine Kurtenbach - Associated Press)
Posted by Michael Carter at 10:17 AM