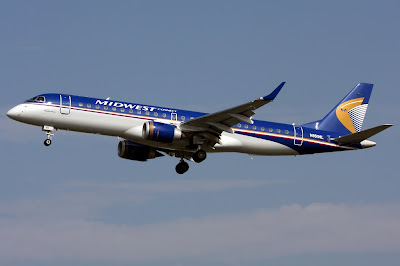 Republic owns Republic Airways, Shuttle America, Chautauqua Airlines, Midwest Airlines, Frontier Airlines and Lynx Aviation. Midwest, Frontier and Lynx were acquired during the third quarter. Revenue fell 6.7% to $359.6 million while expenses were down 0.6% to $323 million. The operating loss of $32 million was about level with the $32.5 million deficit suffered last year.

Chairman, President and CEO Bryan Bedford told ATWOnline in September that he expected to see a drop in earnings over the next few quarters because of the acquisitions. "You will see our earning diminished as we go through all the integration issues. Our belief is that the integration will be completed by March 2010," he said.

During the third quarter, flying was reduced when 22 aircraft that had been flying for Continental Airlines under a fixed-fee agreement were removed from Republic's operation. Of those, 17 were returned to the lessor, three were subleased offshore and two are expected to be subleased in the 2010 first quarter.

Republic's nine-month surplus of $19.5 million represented a 70.2% drop from $65.5 million in the year-ago period.
(Sandra Arnoult - ATWOnline News)
Posted by Michael Carter at 3:19 AM