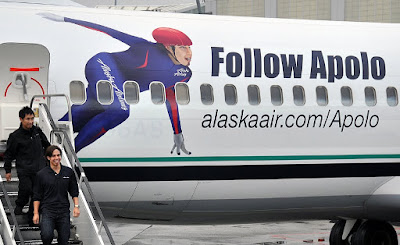 (Alaska Airlines)
Alaska Airlines and Apolo Ohno unveiled a specially themed Boeing 737-800 adorned with a larger-than-life image of the celebrated speed skater and "Dancing With The Stars" winner. The unique design features the Seattle native on the aircraft's fuselage and invites travelers to "Follow Apolo" at www.followapolo.com as he pursues winter gold in Vancouver, British Columbia.

"Apolo is one of the most decorated Olympians in history, and we're thrilled to support him on his road to Vancouver," said Brad Tilden, Alaska's president. "The ‘Follow Apolo' jet will fly across our route system to build excitement for this great American athlete."

On www.followapolo.com, fans can track Ohno's quest to become the most decorated winter athlete in U.S. history, view behind-the-scenes training videos, sign up to receive e-mail updates from Ohno, and send questions to his blog.

"It's an honor to be featured alongside Alaska's trademark Eskimo and have the support of my hometown airline for the most important race of my life," said Ohno, after seeing the plane for the first time.

A team of Seattle-area youth speed skaters aspiring to follow in Ohno's path accompanied the athlete onboard the aircraft as it was unveiled at Seattle-Tacoma International Airport. The skaters are members of Pattison's Team Extreme and train at Pattison's West Skating Center in Federal Way, Wash., where Ohno trained as a teen.

A native of the Seattle area, Ohno began his speed-skating career at age 14 in Seattle and Vancouver. He went on to become the youngest skater to win a World Cup event title in December 1999. Ohno has since won 11 national champion, 18 world champion and five Olympic medals.

(Alaska Airlines - Press Release)
Posted by Michael Carter at 8:12 AM